Jewish with Feeling A Guide to Meaningful Jewish Practice

By Joel Segel, Zalman Schachter-Shalomi
A mystical masterpiece filled with spiritual practices and an exciting vision of the future.

Rabbi Zalman Schachter-Shalomi fled Nazi-occupied Vienna and immigrated to the United States in 1941. Educated by Hasidic masters, he was ordained in 1947 and received a Ph.D in 1968 from Hebrew Union College. A professor emeritus at Temple University in Pennsylania, he now lives in Colorado and teaches at Naropa University. Reb Zalman is the inspiration of the Jewish Renewal movement.

In this bellwether volume, he and Joel Segel, a former editor at Shambhala Books, present an inspiring and expansive vision of Judaism that is informed by mysticism, Hasidism, everyday spirituality, creative use of ritual, and an intriguing understanding of meaningful Jewish practice: "Today, I feel more than ever we Jews are integral and necessary to life in the larger body of nations on planet Earth, that we need to be the healthy vital organ of the whole Earth that we are meant to be. By being the best and most enlightened Jews we can, we place ourselves at the service of all other beings with whom we share the here and now."

Rabbi Schachter-Shalomi explains that Judaism is a "householder religion" where rituals and prayers are done in the home among family and friends. He begins with a spiritual exploration of the relationship with God and sees it founded not on belief but on a deep yearning in the heart. Faith, he writes, is "like swimming the backstroke, reaching above and behind into an unknown we cannot see." He presents a rich discussion of the rituals of the Sabbath and explores the vitality of prayer once we "turn off our mental computers and tune in to our feelings." Tallying up the distinctive dimensions of Judaism, he comes up with: its special gift for aligning individuals with nature's clock, its teachings on conscious consumption, its living dialogue with the texts that are the beating heart of the universe, its down-to-earth spirituality, and its ability to maintain faith and connection to God despite powerlessness and uncertainty. He also is convinced that Jews can contribute mightily to conscious environmental practices that will benefit the planet and future generations.

Reb Zalman is a major advocate of the multifaith movement in which the world's religions acknowledge their unity in diversity. He has long been friends with the Dalai Lama, Ram Dass, and others religious leaders. "The thing that allows people of different faiths to make a true and deep connection, whatever differences, is our yeaning and love for God. That is what we keep coming back to. This is true for Muslims as well as Christians."

More than ten years ago, the author wrote a pioneering work on spiritual eldering, which he described as a process whereby older people took time to "contemplate their life journey, harvest the wisdom of their years, and transmit a legacy to future generations." Reb Zalman admirably fulfills all three of those objectives in this enlightening mystical masterpiece that is practice-oriented and filled with exciting visions of the future. 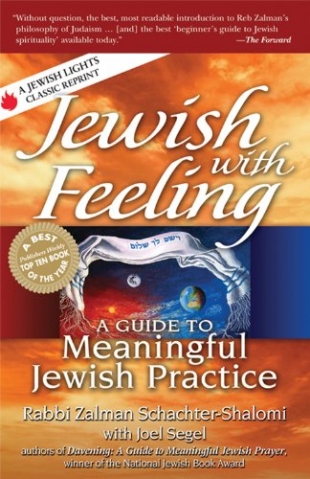