Gandhi's Hope Learning from Other Religions as a Path to Peace

By Jay McDaniel
A soul-stirring and enlightening overview of the adventure of wisdom in our times.

In A Nutshell: This extraordinary paperback explores the riches of the world's religions using the approach of complementary pluralism. With great succinctness, Jay McDaniel outlines the five challenges faced by the world's wisdom traditions: to live compassionately, to live self-critically, to live simply, to live ecologically, and to welcome religious diversity. Using Gandhi's hope for peace among religions and Alfred North Whitehead's process theology, the author tackles religion meeting science, Christianity and the call to listen, the whole world as a monastery, three aims in life, a walk in beauty, the case against religion, peace as beauty-in-the-making, and God, creativity and the sacred.

About the Author: Jay McDaniel teaches at Hendrix College in Conway, Arkansas. He is the author of With Roots and Wings: Christianity in an Age of Ecology and Dialogue and Living from the Center: Spirituality in an Age of Consumerism. In these books and in lectures, McDaniel probes the intersection of Christian and Buddhist studies, theology of religion, ecology, and spirituality.

Sum and Substance: This book is part of Orbis' series "Faith Meets Faith." McDaniel begins with Gandhi's statement: "I can see clearly the time coming when people belonging to different faiths will have the same regard for other faiths that they have for their own." Such openness to other religions is what is needed in the twenty-first century as more and more people come into contact with people of traditions other than their own. McDaniel supports what he calls "creative synthesis" whereby a person appropriates insights from other paths in a respectful way. Religious dialogue does not simply aim at mutual understanding but mutual transformation. McDaniel rejoices in the healing ways in which Buddhists and Christians have gotten together not to discuss beliefs but to meditate together or to come up with fresh approaches to practicing compassion in a world torn by violence.

Listening to others and welcoming the stranger are "defining characteristics of an authentic Christian spirituality." Throughout the book, McDaniel presents friendly readings of the world's religions as an antidote to the fear-based approach of exclusivism. He correctly sees the wisdom traditions as an alternative to the consumer-driven values of appearance, affluence, and achievement. And you will have to look long and hard to find better definitions and overviews of the spiritual practices of beauty and peace than those offered on the pages of this book.

• "Peace at its deepest level has a musical quality like that of an improvisational jazz concert. The music at such a concert consists of a creative and evolving harmony of sound produced by different musicians who have the material wherewithal to purchase their instruments and who are cooperatively responding to one another in an ongoing live performance, often in surprising and joyful ways. If the concert is to continue, the musicians must be willing to keep on playing even when things threaten to fall apart, and they must be willing to forgive one another for the mistakes they might make. Peace is like this. It can be unpredictable, filled with creative tensions, and it can have its sad and mournful moments. But it is cooperative and creative, surprising and sometimes joyful, and its competitive dimensions do not degenerate into violence."

• "To get to know people of other religions and to undertake friendly readings of their traditions is akin to lighting a candle that helps brighten our small corner of the world, helping to dispel the blindness that permeates the region."

• "A walk in beauty can be facilitated not only by theology but also by the companionship of others, a recovery of felt bonds with the earth, a practice of spiritual disciplines, and service to others. In whatever way the walk emerges in our lives, it emerges not simply as an achievement but also as a gift: something that happens to us and in us, apart from our more willful ways of being in the world. The psychiatrist Gerald May puts it well when he says that a walk in beauty involves a spirit of willingness as opposed to willfulness: cooperating with something deeper and wider and richer than the private self. Most of us who are religious know that a walk in beauty requires such willingness, such cooperation, so that our attitudes and awareness can be transformed."

• "Of course, imagining the world from a beetle's point of view is fanciful and some might ridicule it as irrelevant to any real concerns. But from a process perspective, such an imaginative exercise is, in its own way, a kind of prayer, because it is a way of sharing in the divine life. In process theology, God is immanent within all living beings as a lure to live with satisfaction. God knows not only humans but also non-humans with an incomparable intimacy. God does indeed know what it is like to be a beetle, even though humans can have only a dim intuition. Accordingly, a playful meditation on 'what it might be like to be a beetle' can be a spiritual practice in its own right, a finite and human sharing in divine empathy for each and every creature. Equally important, such imagining can be a healthy antidote to a kind of anthropocentrism that too often, and unnecessarily, creeps into monotheistic consciousness. We monotheists all too frequently imagine the earth as a castle of divine making, designed for human use and pleasure, with the rest of creation as mere backdrop."

If You Like This Book, You'll Also Want to Read . . .
• The Divine Deli: Religious Identity in the North American Cultural Mosaic by John Berthrong
• The Gethsemani Encounter: A Dialogue on the Spiritual Life edited by Donald Mitchell
• The Mystic Heart: Discovering a Universal Spirituality in the World's Religions by Wayne Teasdale
• A New Religious America: How a "Christian Country" Has Become the World's Most Religiously Diverse Nation by Diana L. Eck 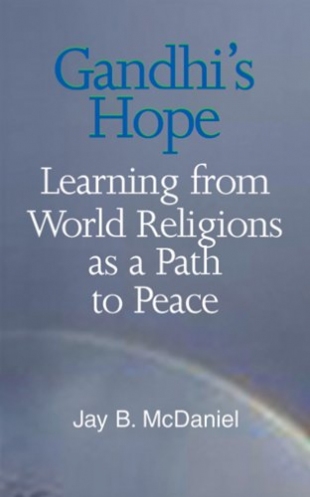