Hidden Treasure Uncovering the Truth in Your Life Story

By Gangaji
Gangaji on taking note of the silence beneath the noise.

"Papaji was a householder. He had a job and a family. He had to spend time speaking. One of the benefits of his being a householder is that he had to find the reality of absolute silence within the interplay of relative noise and relative silence. It is a benefit to us that he made this discovery.

"One of the most important moments in my time with Papaji was a day when he took us to the market in Haridwar. Indian markets, similar to markets everywhere, are noisy places. They are centers of activity with all types of people shouting or singing or begging people to buy their goods. Added to the noise and the, smells was the enervating heat of midday.

"Earlier that morning we had been sitting peacefully in his small rooms by the river. While at the hot market I had thoughts of wanting to be back in the peace of his rooms with the cooling breeze of the river and the only sound being the whap, whap of the ceiling fan. After internally complaining for a moment or two, I looked up and happened to catch his eye. With startling clarity I seemed to hear him say, 'Here too.' In wonder and bliss, the silence underneath the noise was suddenly obvious. 'Underneath the noise' is not precisely correct, but at the time it appeared that way. Later I realized that whatever the noise level, I am here also, and I am silence itself.

"Whether listening to Papaji deliver a dharma discourse, hearing him tell a teaching story or some story from his earlier life, going shopping with him for vegetables for the evening meal, or sitting simply in his rooms, each moment was an invitation to silence. Each word was pointing back to and bringing the news of its silent origin.

"Papaji would sometimes spend time with a student carefully directing him to follow a thought back into the empty, open space it had come from. He would ask the student to choose any thought and speak it out loud. The student might respond, 'I can't stop my thoughts.' Then Papaji would direct, 'Follow that thought all the way back from whence it came. First the "I" falls back, then the "can't," then the "stop," then the "my," then the "thoughts" . . . What is left now?'

"In the luminous open mind, free of the thought that disappeared when followed back rather than chased forward into the ten thousand thoughts, the student's face would be filled with wonder. 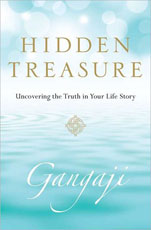