By Nyogen Senzaki, Paul Reps
A timeless classic filled with deep reserves of wit and wisdom.

First published in 1957, this Zen reader has sold over one million copies. The book is divided into four parts. "101 Zen Stories" opens the door to the clever techniques used by Zen masters to show their students the flaws in logical thinking and the idea of separateness. "The Gateless Gate" is a collection of thirteenth century koans that confound reason but convey an unflinching pursuit of truth. "10 Bulls" is a spiritual allegory of the stages of gradual awakening experienced by Zen practitioners. "Centering" is a 4,000 year-old teaching from India.

Many of these Zen stories have appeared in countless other books. You will recognize as old friends the university professor who is chided by his Japanese master for not being an empty cup, the man who plucks a strawberry to eat as he hangs over a precipice, and Ryokan's gift of his clothes to a thief who finds nothing to steal at his place. Zen Flesh, Zen Bones is a timeless classic filled with deep reserves of wit and wisdom. 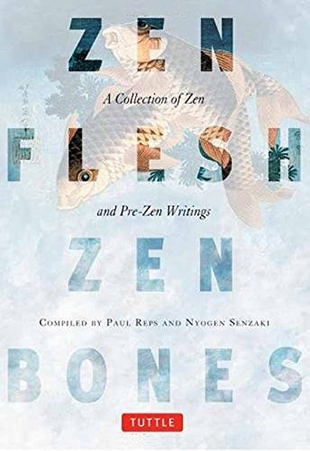