By Gabriel Horn
Native creation accounts, love songs, prayers, traditional stories, and ceremonies arising out of a felt sense of participation in the universe.

"We enter into a ceremonial state of consciousness with respect for life, and for the purpose of well-being and balance, not only within our own lives, but for the Earth, our Mother, as well," writes Gabriel Horn, author of Native Heart and several other books. At the heart of Native American spirituality is a reverence for the Great Mystery and an abiding sense of gratitude for all that exists. Or as Albert Einstein once said: "No hierarchy of life exists, no superior life forms, just equal parts that make up the whole."

Enhanced by the art and illustrations of his son Carises Horn, the author presents in this book Native creation accounts, love songs, prayers, and traditional stories. He offers his interpretations of various rituals including greeting the day, marriage, pregnancy, birth, death, divorce, healing, and much more. The primal wisdom that emanates from these ancient teachings lifts up the spiritual practice of reverence — one that is often lacking in modern times. Horn demonstrates a kind of radical amazement, a deep feeling tinged with both awe and wonder as he sees the sacred in all things. These ceremonies touch the heart because they arise out of a felt sense of participation in the universe, a kinship with all beings and with matter. 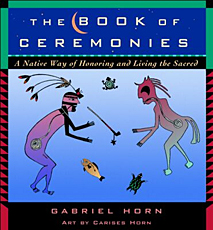