Writing in the Dust After September 11

By Rowan Williams
Some of the difficult lessons that can be learned from this tragedy.

Rowan Williams is the current Archbishop of Wales and the newly designated Archbishop of Canterbury. A notable theologian, he was set to tape a program on spirituality at Trinity Church Wall Street, just two blocks from the World Trade Center, on September 11, 2001. Along with others from Trinity, he escaped downtown Manhattan as the Twin Towers were collapsing.

In this profound work written several weeks after the tragedy, he tries to put into words his Christian responses to the grief and shock and loss of that moment. The subjects covered here are complicated: the use of religious language, the end of war, the tricky slopes of globalization, and the manipulation of symbols. Williams measures his words carefully, well aware that these are not areas that can be summed up in a few words.

The author offers some trenchant observations about the United States, which is viewed elsewhere as a privileged nation in this era of globalization. One result of September 11 is that Americans must begin to see themselves as they are seen on the world stage. Or as Williams puts it, "Every transaction in the developed economies of the West can be interpreted as an act of aggression against the economic losers in the worldwide game . . . Globalization means that we are involved in dramas we never thought of, cast in roles we never chose." This means that much more attention must be given to the impact of American policies upon other nations.

Williams hits the nail on the head in his sensitive treatment of the special way the events of September 11 put many of us in touch with the plight of people around the world living in areas of great and constant danger: "We have had an experience that is not just a nightmarish insult to us but a door into the suffering of countless other innocents, a suffering that is more or less routine for them in their less regularly protected environments." Never again can we turn our backs on the fear and the anguish of those in cities where terrorism or civil war makes life a hell on earth. This thread of unity ties us all together in a way that was inconceivable before the September day. Now we are all together in the same wobbly boat, unsure of what the future will bring. 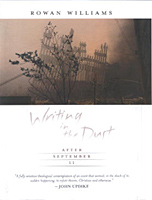