The Gospel of Mary Magdalene

By Jean-Yves LeLoup
Text and commentary that salutes the Divine Feminine and the mystery of becoming fully human, the incarnation of God.

Jean-Yves Leloup is the founder of the Institute of Other Civilization Studies and the International College of Therapists. His translation of the Gospel of Mary is presented along with a commentary on the text which was discovered in 1896, nearly 50 years before the Gnostic Gospels were found. In the foreword, philosopher Jacob Needleman salutes this work for helping to deepen the mystery of Christianity. He concludes: "No mystery is greater or more welcome than this — that above our minds, in the depths of silence, we may be given to know ourselves as Being and as created to serve the good both for God and our neighbor."

For Leloup, Miriam of Magdala is the intimate friend of Jesus and the initiate who transmits his most subtle teachings. She is the one the disciples acknowledge as having first seen the resurrected Christ. But during those times, women were prohibited from studying the secrets of the Torah. No wonder Leloup translates Peter as saying of her: "How is it possible that the Teacher talked in this manner with a woman about secrets of which we ourselves are ignorant? Must we change our customs and listen to this woman? Did he really choose her, and prefer her to us?" This, of course, brings to mind other whining by the disciples about who would be greatest in the kingdom. And it has contemporary relevance to the continuing misogyny within certain Christian communities. It is so sad that centuries have not cleared away this prejudice. Here ignorance definitely results in sin and separation.

In his commentary, Leloup states: "It is Miriam of Magdala who serves the disciples as a midwife, not of body or soul, but of the eternal Son whose Presence seeks to reveal itself in the very heart of that which trembles most within them." What is she bringing to birth in her gospel? The bounties of devotion, peace, silence, and truth. The author tells the story of a nun who came to visit Abba Anthony, one of the most respected of the desert fathers. When a young monk noticed her among the assembled brothers, he was deeply shocked, and demanded to know why a woman was allowed in their monastery. Abba Anthony replied: "Look well among all us monks assembled here, and you will see only one human being — her."

Becoming fully human in the image of God is what it is all about. Leloup translates the following crucial passage spoken by Mary to the disheartened disciples:"Do not remain in sorrow and doubt, for his Grace will guide you and comfort you. Instead, let us praise his greatness, for he has prepared us for this. He is calling us to be fully human."

Of course, this isn't enough for some believers who want dividing lines established between the righteous and the unbelievers. For these zealous souls, the Gospel of Mary will remain a heretical document. But for others, it contains treasures that stretch our minds and souls — hints of the Divine Feminine, an endorsement of visions and the value of the creative imagination, and a joyful celebration of the mystery of grace. 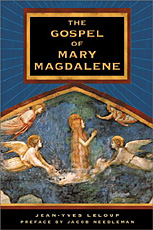