By Richard Mahler
A presentation of the benefits of quiet-alone time for stressed-out and discontent souls.

After ten years as a self-employed writer, radio producer, and teacher in Los Angeles, Richard Mahler moved to Santa Fe where he began to enjoy the slower cadences of life. This inspired him to take a three-month retreat in the Tusas Mountains of New Mexico as a caretaker on an isolated ranch. This quiet alone-time gave him a chance to experience the slower cycles of nature and to savor his own senses in long unstructured days. In ten chapters, Mahler shares the benefits that can accrue from silence and solitude. He now is a regular commentator on NPR and teaches stress reduction, meditation, and yoga.

Clinical studies have revealed that even small periods of solitude can improve one's health and well-being by producing sharper memory, less irritability, improved concentration, deeper relaxation, an easing of depression, and better sleep. Writers Terry Tempest Williams, May Sarton, Anthony Stores, and others are quoted as they bear witness to other benefits of quiet alone-time, such as access to spiritual or mystical experiences, expanded self-understanding, communion with nature, development of the imagination, and liberation from unwanted distractions.

Mahler is convinced that we pay a high price for affluence, and it is not only measured in dollars: the cost also includes compromised health, strained relationships, and negative impacts on the natural environment. When he returned to the "outside" world, he was immediately taken aback by the speed and agitation around him in a gas station mini-market: "I felt overwhelmed to the point of paralysis by the products on display, the blaring radio, the exhaust fumes, and the ill-humored purposefulness of the constant stream of customers."

Throughout the book, Mahler points out the assault of modern life on the senses and the psyche. Jochen Schacht, a professor of biological chemistry at the University of Michigan's Kresge Hearing Research Institute, has observed, "Our ears are not made for a noisy world — they're made for spoken communication, which occurs at a level far below what we experience in the streets or at the airport. The fact that we are losing our hearing is no more surprising than if we were losing our sight by looking at the sun." One of the ways to counterbalance this problem is to consciously seek out silence and bathe in it as much as possible whether in a church, a park, or elsewhere. Slowing down the pace of our life is an antidote to the excessive speed around us.

Of course, slowing down and simplifying our lives goes against the grain of the culture. It is difficult to change our ways. An even bigger block to silence and quiet-alone time is fear of boredom or anxiety about coming face-to-face with our inner selves. As Mahler puts it: "Without external distraction, we may worry that internal stimuli may be insufficient to hold our fickle attention. The aversion underlying this is that silence will mean emptiness, that being alone will mean restless panic."

Stillness: Daily Gifts of Solitude makes a good case for the healing and salutary benefits of quiet alone-time. It may not be everyone's cup of tea but for millions of stressed out and inwardly discontent souls, it will prove to be good medicine. 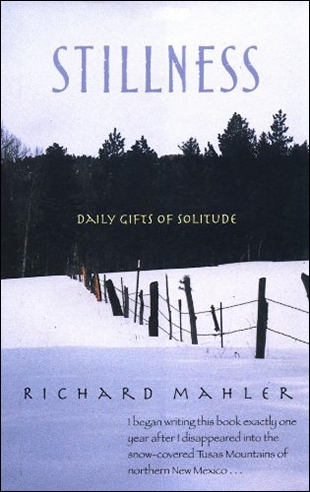