No Word for Time The Way of the Algonquin People

By Evan T. Pritchard
One of the best books on Native American spirituality with insights into the practices of reverence, teachers, devotion and grace.

In this extraordinary paperback, Evan T. Pritchard has come up with an astonishingly lyrical and spiritually deep summation of the the myths, history, and philosophy of the Algonquin people and particularly his own Wabanaki people, the northeasternmost of all Native Americans. The author, who taught a course on sacred poetry at Columbia University, was tutored by his Micmac elders and also studied their language extensively. The Micmac have a phrase, "Things fall together," which means don't worry about how anything will turn out since the Great Spirit controls everything.

Pritchard shares his experiences of fasting, his first sweat lodge, going on a vision quest, and receiving his spiritual name. He writes eloquently about Algonquin purification rituals, the art of giving things away, dance as sacred poetry in action, singing, cherishing diversity, respecting elders, honoring children, and reverencing the earth.

Pritchard adds texture to No Word for Time by comparing Algonquin ideals and practices to other religions. As he notes, "The universe is big enough for all truth. We don't have to destroy someone else's to make room for our own." In a soulful new afterword, Pritchard shares with us seven suggestions on finding a balance between Native timelessness and our "clock-crazy" world. This is one of the best books on Native American spirituality for many a moon. 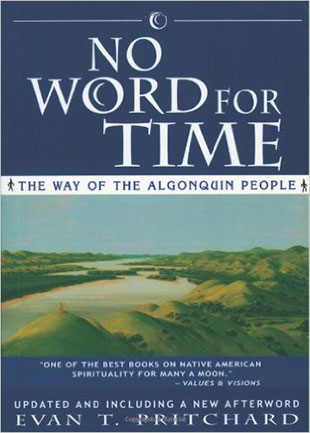