Encountering God A Spiritual Journey from Bozeman to Banaras

By Diana L. Eck
The author's encounters with people of other religions that have challenged and enriched her Christian faith.

Diana L. Eck is a Harvard professor of comparative religions and Indian studies who has been active in the interfaith dialogue program of the World Council of Churches and now heads the Pluralism Project to study and document the growing religious diversity of the United States. She is convinced that her encounters with people of other faiths have challenged, changed, and deepened her Christianity.

Eck began her spiritual journey as a Methodist in Bozeman, Montana. Years later, experiences in Banaras, India, helped her come to a richer appreciation of God, everyday spirituality, and the Holy Spirit. Specifically, her encounter with Hindus and their polytheistic consciousness resulted in the expansion of her repertoire of images of God. Living among people who could see God's presence in an enlightened person, a cow, a basil bush, or even a lump of clay challenged the author to constantly be on the lookout for fresh signs of grace. Watching Hindus bathing and praying at sunrise in the Ganges signaled an opportunity to rethink her understanding of the activity of Spirit in nature.

Jesus' aversion to exclusivity and his hospitality to all make up the cornerstone of Eck's belief in pluralism which, as she puts it, does not mean giving up our own faith commitments but opening them up to the challenges of mutual discovery, understanding, and transformation. The author's fascinating spiritual journey from Bozeman to Banaras proves the rich harvest that can result from interreligious dialogue. The mutual enrichment of Christianity, Hinduism, Judaism, Islam, Buddhism, and other traditions will come through spiritual interdependence — a path that is both honored and explicated in this salutary book. 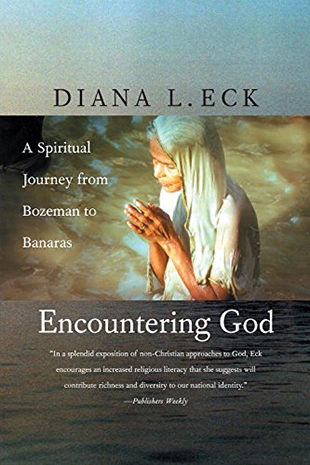