By John Bookser Feister, Richard Rohr
A challenge for Christians to grow in the faith, to practice littleness, and to accept a calling as sons and daughters of God.

Franciscan priest Richard Rohr is founder and animator of the Center for Action and Contemplation in Albuquerque, New Mexico. For this spunky and always congenial anthology, editor John Bookser Feister has brought together 408 meditations spanning 20 years of Rohr's popular audiocassettes, published and unpublished writings. There is much here to absorb and appreciate.

One theme that comes shining through is Rohr's disappointment that more Christians do not seem to accept or do much with their status as the sons and daughters of God. He goes even further in a mediation on the sin against the Holy Spirit: "Our only real badness consists in the repression of our goodness, which is the Spirit given and promised. And that is indeed bad. Empirically, this badness shows itself in hardness, nonlistening, the refusal to feel, self-hated in its many disguises and superficiality in general. This is the great sin of nonbelief, which aborts the human soul a thousand times a day. We refuse to believe who the Son has told us we are-sons and daughters of the living God. We hate ourselves mercilessly, and in many ways our preoccupation with sins has kept us from the recognition of this great sin. It is the unforgivable and unrecognized sin against the Holy Spirit, because it is unrecognized disbelief in what God has done." Powerful words and so true. Think what a different world it would be if believers practiced both contemplation and action as a response to the radical grace that has made them free!

Another recurring theme is the problems facing the Christian community. Rohr hits the nail on the head when he writes: " Thomas Merton liked to repeat an insight from Zen Masters: All of these religious gifts that are given to us are no more than fingers pointing to the moon. Religion endlessly gets involved with the fingers — defining them, proclaiming them, protecting them, fighting about which finger is better, which finger is going to save you, instead of paying attention to the moon. Everything, in the light of the Kingdom of God, is a means, a finger. It's the moon, the goal that matters, and the goal is God. Pope, institutional Church, Bible, sacraments, priesthood, all of these things we spend ninety percent of our time worrying about, those are the fingers pointing to the moon. But it's the moon we must see." This is an important point to keep in mind whenever we see exaggerated stands being taken by church groups that reveal a distorted emphasis.

A third theme is Rohr's reverence for the practice of littleness. He reveals that the patron saint for the Center for Contemplation and Action is John the Baptist who decreased so Jesus could increase. Another model is Mary, the mother of Jesus. He states: "The central Old Testament themes of election and of the anawim — a Hebrew word meaning 'the poor little ones' — show a continual refinement of what Jesus finds most attractive in human persons, and, therefore, the core meaning of humanness. It can be summed up in four terms: littleness, longing, openness and surrender." Only those who see themselves in this way can truly give themselves to God and step out of the way of others, again and again in their daily lives.

These are only three themes in this collection of meditations by a Catholic who constantly challenges us to grow in the faith. There are many equally valuable and inspiring. 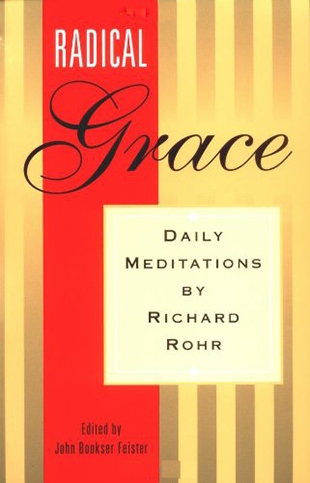