"Most of the people I know who have what I want — which is to say, purpose, heart, balance, gratitude, joy — are people with a deep sense of spirituality. They are people in community, who pray, or practice their faith; they are Buddhists, Jews, Christians — people banding together to work on themselves and for human rights. They follow a brighter light than the glimmer of their own candle; they are part of something beautiful."
— Traveling Mercies

"It's funny: I always imagined when I was a kid that adults had some kind of inner toolbox, full of shiny tools: the saw of discernment, the hammer of wisdom, the sandpaper of patience. But then when I grew up I found that life handed you these rusty bent old tools — friendships, prayer, conscience, honesty — and said, Do the best you can with these, they will have to do. And mostly, against all odds, they're enough."
— Traveling Mercies

"Carolyn Myss, the medical intuitive who writes and lectures about why people don't heal, flew to Russia a few years ago to give some lectures. Everything that could go wrong did — flights were cancelled or overbooked, connections missed, her reserved room at the hotel given to someone else. She kept trying to be a good sport, but finally, two mornings later, on the train to her conference on healing, she began to whine at the man sitting beside her how infuriating her journey had been thus far.
"it turned out that this man worked for the Dalai Lama. And he said — gently — that they believe when a lot of things start going wrong all at once, it is to protect something big and lovely that is trying to get itself born — and this something needs for you to be distracted so that it can be born as perfectly as possible."
— Traveling Mercies

"Grace is the light or electricity or juice or breeze that takes you from that isolated place and puts you with others who are as startled and embarrassed and eventually grateful as you are to be there."
— Traveling Mercies

The Mystery of God's Love

"The mystery of God's love as I understand it is that God loves the man who was being mean to his dog just as much as he loves babies; God loves Susan Smith, who drowned her two sons, as much as he loves Desmond Tutu. And he loved her just as much when she was releasing the handbrake of her car that sent her boys into the river as he did when she first nursed them. So of course, he loves old ordinary me, even or especially at my most scared and petty and mean and obsessive. Loves me; chooses me."
— Traveling Mercies

No Firm Rules for Prayer

" 'Help' is a prayer that is always answered. It doesn't matter how you pray — with your head bowed in silence, or crying out in grief, or dancing. Churches are good for prayer but so are garages and cars and mountains and showers and dance floors. Years ago I wrote an essay that began, 'Some people think that God is in the details, but I have come to believe that God is in the bathroom.' Prayer usually means praise, or surrender, acknowledging that you have run out of bullets. But there are no firm rules."
— Plan B

Having A Good Dog

"Having a good dog is the closest some of us will ever come to knowing the direct love of a mother, or God."
— Plan B

"I'm so much juicier. And as that old saying goes, it's not that I think less of myself, but I think of myself less often. And that feels like heaven to me.
— Plan B

"Rest and laughter are the most spiritual and subversive acts of all."
— Plan B

Pick Up Some Trash

"When my priest friend Tom is at his most despondent over Bush and global warming, he goes around his neighborhood picking up trash and dog shit. It definitely helps on days when you can't see much hope for this sweet old planet. In the long haul, grace will win out over everything, over the misery, the stupidity, the dishonesty."
— Grace (Eventually) 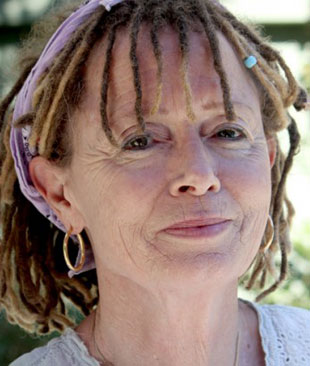