Howard Thurman (1889 – 1991) has been heralded for his pioneer work in race relations and his role as a spiritual advisor to Dr. Martin Luther King, Jr. Full of energy and enthusiasm for life, he wore many hats. As a prolific writer, he wrote sermons, poems, meditations, and a watershed work Jesus and the Disinherited. As a professor of theology, he taught at such renowned institutions as Howard University and Boston University. And as a Baptist minister, he was the pastor of the Fellowship Church for All People, the nation's first interracial, intercultural church community. Later, he was the first black Dean of Marsh Chapel at Boston University.

Thurman was born and raised in Daytona, Florida. He was raised by his grandmother, who had been a slave. In 1925, he became an ordained Baptist minister. His first pastorate, at Mount Zion Baptist Church in Oberlin, Ohio, was followed by a joint appointment as professor of religion and director of religious life at Morehouse and Spelman colleges in Atlanta, Georgia.

In the 1930s, he traveled to India where he became the first black American to meet Mohandas Gandhi, who taught him the strategy of nonviolent resistance. Back in the States, he joined the faculty of Howard University's School of Religion as professor of Christian Theology. His work overseeing matters related to the chapel and religious programs later led to his being appointed dean of the university's Rankin Chapel.

Thurman advised Dr. King and members of the Civil Rights movement to integrate contemplative spiritual practices into their nonviolent demonstrations and peace activities. Maya Angelou has written, "I have read Howard Thurman and been informed, influenced, and girded by his courage, intelligence, and abiding love." 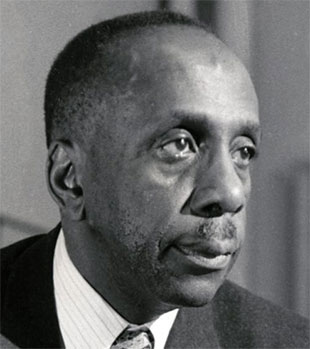