An Interview with Bahman Ghobadi

Bahman Ghobadi was born in 1969 in Baneh, in Iranian Kurdistan. While he was a student, he worked for a radio station and went on to join a Sanandaj group of amateur filmmakers who helped him direct his first short films. He then relocated to Tehran to attend film classes at the university but he dropped out before graduating. Between 1995 and 1999, he directed ten or so short films, which garnered many awards in several national and international festivals. Among others he was awarded the Clemont-Ferrand Festival Special Jury Prize for Life in the Fog. In 1999, he became Abbas Kiarostami’s first assistant on The Wind Will Carry Us. This interview with the filmmaker was conducted by Mamad Haghighat, an Iranian screenwriter and author of A History of Iranian Cinema, upon the occasion of the release of the director's film Turtles Can Fly.

Mamad Haghighat: In your first film A Time for Drunken Horse, the story was centered around poor children. In the second film, Songs of My Motherland, you dealt with the adult world, and in your new film, Turtles Can Fly, children are again at the heart of the story. What made you want to talk about them?

Bahman Ghobadi: I did not really plan to do so. I had wanted to make an urban film about my past, but when I went to Baghdad for the release of Songs of My Motherland two weeks after the war between the US and Iraq, I saw so many horrors about how people lived, especially children, who had been as in all wars, the first casualties, and yet nobody seemed to care! I was particularly overwhelmed by the case of a child who had been maimed. I wanted to make a film against the war. So I went back there and lived among children to be able to feel close to them. Then I tried to reconstruct what they had been through.

M.H.: Kak Satellite, one of the boys is in the beginning more of a survivor than the others and then he becomes increasingly overbearing, almost despotic. Could you tell us more about him?

B.G. Kak Satellite can fall in love, he can act magnanimously and he is still perceptive to people’s feelings, unlike dictators. They, by contrast are nothing but monsters.

M.H.: In your film children are assigned the job to pick up mines and sell them. How long has Kurdistan been mined? And why has it been so? Who brought those mines?

B.G.: I don’t know for how long but my mother and my grandmother . . . told me the history of antipersonnel mines and stories about casualties of mines. Since they were invented Kurdistan has been and still is one of the hardest hit countries. American and European weapons makers sell them to dictators like Saddam Hussein and others who have swamped the country with them. I think it will take a long time for the country to get rid of its mines. Every day, each and every hour poor innocents get killed or are maimed because of the mines. Nowadays there are families who call their newborns "Mine"!

M.H.: In the film, everybody tries to find out news about the impending war thanks to the satellite. But on the one hand they don’t understand the language, and on the other most of the images broadcast by the media go against their beliefs, it’s the maimed boy who gives them the right news, by predicting the future.

B.G.: The TV networks belong to interest groups who regard the citizens of the world as mere puppets. What with their TV channels and their wars, we are part of a big game. They impose their dirty war on use to enrich themselves . . . Nowadays because of the situation in our region and its dire consequences on the rest of the world I have doubts about all sort of information, even about the written media.

M.H.: Bearing in mind Yilmaz Guney’s films and those of the filmmakers of the region, can we speak of a Kurdish cinema today, with a specific Kurdish identity?

B.G.: I think it’s too early as yet. When there are at least two or three movie theatres, laboratories and the like, in each and ever Kurdistan town, well, we’ll then be able to speak of a Kurdish cinema. But today there are virtually no theatres and if by chance you find one, there’s no audience because the people have no money. They’ve spent it all on food and weapons!

B.G.: I mean to make films my own way. I’m inspired by my country’s culture. This is something that comes from within. I’m passionate about suffering and pain. I make films because I’d like to be able to share in my own people’s suffering. I feel suffused with energy when I’m by their side.

M.H.: In most internationally successful Iranian films, filmmakers use non-professional actors. You do likewise. Why is that?

B.G.: In Kurdistan, we have no actors because film is a new art form over there. But even though I do use "non-professionals," I still work with them as if they were actual professionals; I direct them so that they can be totally at one with their characters.

M.H.: In the film, the story’s told from the viewpoints of two characters: that of the suicidal young girl and that of Kak Satellite. Was the dual perspective already in the script or did you think it up during editing?

B.G.: It already appeared in the script. I meant to do some sort of collage and I meant to set myself apart from other Iranian filmmakers. I wanted Kak Satellite to serve as a driving force that draws together the different parts of the story, so that the storytelling remains consistent for the audience. And at the same time, I wanted to tell the story of the young girl, traumatized by her past, and of her brother who can foretell the future. Once the film is over, you realize that the past is bitter; that the present is bitter, and that you should look up to no one but yourself for the future. Powerful foreigners have no intention to create a heaven for us. As far as they’re concerned, they are exploiting us to have wonderful places thy can enjoy.

M.H.: In all your films, you tell about the life of the villagers and country people. Aren’t you interested in urban lifestyle?

B.G.: I’ve never been attracted to urban lifestyle because it’s so complicated! During the year, I live six to seven months in a rural area in Kurdistan, listening to music and taking pictures or making films.

M.H.: Turtles Can Fly has been the very first Iraqi film made after the collapse of Saddam’s regime and it’s been quite decently funded. How did you find the funding? Has the film already been released in Iraq?

B.G.: I did the funding myself but I also borrowed some money. I had much difficulty finding the money for my previous films. Hopefully the day will come when I don’t have that kind of problem anymore, so that I can make more ambitious films. As for the film’s release, I hope it can open in Iraq in September or October thanks to my friends.

M.H.: What about your next film?

B.G.: I have a script ready. The film takes place in a city and is quite eventful. The atmosphere in it is made of mage realism. 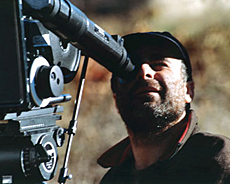