An Interview with Doris Dorrie

The director talks about her documentary on Zen master and master chef Edward Brown.

Doris Dorrie is the director of How to Cook Your Life, a documentary about the work of Zen master Edward Brown. She is an instructor at the Academy of Television & Film in Munich, Germany; a celebrated writer; and the director of many films, including Nobody Loves Me and Men. This interview was provided by Roadside Attractions.

Doris Dorrie: I met Edward Brown while teaching in Tassajara. I was impressed with his undogmatic way of cooking and at the same time to connect it to Zen teachings. When I saw him cooking I wanted to bring his knowledge to a broader audience. I believe it might be useful for everybody to completely be and live in the moment and at the same time to establish, with cooking, a connection of your body to this moment. This is hands-on instruction to life, which will never leave you regardless of how bad you might feel. Once you have been instructed properly, this knowledge will always stay with you.

What really convinced me is the fact that Edward connects with teenagers who do not have a Zen background. My daughter who was 16 at the time she met him, was fascinated with him. I realized that she was experiencing something, which I only taught her minimally. I started to think about all the things my mother was good at. Was I able to do them? I still know how to cook a goose, but many of the things she knew to prepare are lost. Which knowledge and recipes did I pass on to my daughter? The cultural loss is fundamental.

Your film shows western society with its eating habits and the way we handle food. How do you see our society?

Doris Dorrie: It saddens me that we live in luxury and abundance and the rest of the world has nothing. I feel miserable when throwing away bread. I know that it is complicated to find a solution for a fair and better world, but maybe we can start by having a different attitude in our own kitchen.

What kind of attitude?

Doris Dorrie: To develop respect for food. What does buying cheap meat imply? Not only in regards to general meat production, but also in regards to our self-worth. Do we think of ourselves so low that rotten meat is good enough for us?

Doris Dorrie: The question is: Do I really have to eat meat? Maybe an avocado is much better, healthier and nicer. It is a myth that eating well has to be expensive. Good and healthy food can be cheap if you know what to look for. If you don’t know what to look for, then you are lost and will automatically buy prefabricated and ready-made products. Those products seem to be cheaper, but the way they are fabricated is to maximize profits.

There are two things we have to relearn: to know the components of food and to redevelop respect for food and ourselves.

I admit, when I come home and I am tired, I just want to throw myself on the couch and eat chocolate. To pull myself together and get an orange or a radish instead is hard at that very moment, but if I do so, I am much more satisfied afterwards. The fast and immediate satisfaction of needs has something infantile about it. Gorging chocolate keeps us in an infantile state of mind.

Doris Dorrie: We mastered the ability to disconnect ourselves. We don’t think about where tomatoes and meat come from. We don’t think about the correlation of things. I believe that we can make the connection between a tomato from Spain and African refugees who picked these tomatoes for a starvation wage. This is what they teach in the kitchen in Tassajara: We are connected to everything. What does food mean to us? How do we cook food and how does food "cook" us.

Who is the Japanese Buddhist teahcerin the black-and-white archive film scenes?

Doris Dorrie: That’s Suzuki Roshi, the teacher of Edward Brown. He came from Japan to San Francisco in the 1960s. At the outset a wild group of hippies were his followers. They founded a Zen center in the mountains of California, in Tassajara. Suzuki Roshi follows the tradition of Master Dogen, who brought Buddhism from China to Japan in the 13th century. Until today the tenzo kyokun, the old text from Master Dogen’s Instructions for the Cook is sung in the kitchen in Tassajara: "Select the rice and prepare the vegetables by yourself with your own hands, watching closely with sincere diligence. Carefully protect these ingredients as if taking care of your own eyes. You should not attend to some things and neglect or be slack with others for even one moment. Do not give away a single drop from within the ocean of virtues; you must not fail to add a single speck on top of the mountain of good deeds."

Cooking like Edward Brown does, is realization of these teachings. A request for mindfulness; to stay in the moment and not to be carried away into the past or the future.

Edward Brown is not a saint. You do not portray a higher being but a human one who also struggles with himself.

Doris Dorrie: This is what is fascinating about Zen Buddhism. There is no dogma or concept. Being open for new experiences and not to differentiate between kitchen or temple, the profane or the divine.

There is a wonderful scene where Esward Brown laughts and cries. He talks about his weaknesses, his impatience, and his rage in the kitchen. He talks abouat old teapots.

Doris Dorrie: Yes, they comfort him. Using the old teapots as an example Edward shows impressively how important it is to show your blemishes, your lines, your dents and imperfections. . . . Everything that makes you look damaged and weak. But it is important to show your weaknesses in order to get in touch with others. If we only show our flawless outsides, we can never really get close to one another.

Is being vulnerable an essential part of art?

Doris Dorrie: For me it is! But the fear of being hurt or segregated and not to be part of something is increasing. That is why we try to be invincible and polished. If we show our weaknesses we become vulnerable. We are terrified of not meeting the standards, not making it. I believe that if you publicly voice your opinion you have to be willing to open up, to give something of yourself.

Isn't this also the difference between entertainment and art?

Doris Dorrie: Times of cultural downfall were always times when a polished surface was more important than the contents. We live in exactly such an era. The polished and perfect is always preferred to the dented and imperfect. This applies to culture but also to vegetables. We would rather buy a perfectly round tomato than a crooked one. In truth the imperfect is most of the time more interesting than the perfect.

I always expect of art a personal note and expression as well as an individual interpretation of the world. This is much more interesting to me than perfection, because perfection is often boring and unlively. The Buddhist teacher Suzuki Roshi says that nothing in nature is identical. Everything has its own special value. Each one of us is unique but unfortunately we put so much effort into being identical. The same weight, the same faces, the same purses. This is an expression of great fear. Fear of being punished if you are not perfect. If you don’t fit into this polished surface, you are weak.

How is your film structured?

Doris Dorrie: Just like the workshops of Edward Brown, which are divided into cooking in the kitchen and lectures, the meetings in the Zendo, where Edward as a Zen master imparts his interpretation of the old Buddhist teachings.

Looking at your complete works, where would you place the filmyou’re your books and films you often examine our society and the times we live in.

Doris Dorrie: To me this is the job of an artist.

Your film is funny, full of humor and never didactic.

Doris Dorrie: Yes, because I hate to be moralized. I cannot bear it if somebody tries to tell me how to live, what to eat etc. But you will always get me with humor. This was one of the reasons I liked Edward right away. He is ambivalent and has a great sense of humor. He is a Zen priest, but for sure no saint — sometimes even with a raging temper.

The film is a proposal, an inspiration to a different way of life: to concentrate on the moment, to be present. .  . It is a guide to happiness that everybody can try.

What is happiness for you?

Doris Dorrie: It is important to me to balance fiction and reality. And I like to listen and to observe. Edward is a find, a treasure. A true Zen entertainer and a true artist in the kitchen. 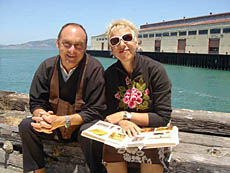