The director of Henry Poole Is Here about the film's themes and characters, and his life experience that helped him connect with the story.

I first came upon the character of Henry Poole in the winter of 2003, when he existed only in a spec script called Stain. Albert Torres had written the funny, human and heartfelt tale of a man facing death who ultimately received the gift of life. I liked it, but was involved with other projects at the time.

In the summer of 2004, my wife passed away suddenly and tragically. It was unexpected and screwed up and wrong. And it turned my world upside down as a man, as a husband, as the father of a 2 ½ year-old girl. I was thrown into a hole of despair and blackness that I would never want anyone else to experience, yet know others do every day. Everyone has suffered and lost and been dealt an unfair card. I am no different. These experiences change us forever, shape us and make us who we are — for better or worse.

This experience has changed me and I am not the same man who started this film 16 months ago.

When faced with a life-changing trauma, you go to the core of survival. You eschew work, and life as you knew it changes — you basically learn how to live in a new way. My primary function was to take care of my daughter and establish a new rhythm and way of life for her, providing routine, security, love and honesty. She came first and she still does, but . . . . Slowly but surely, you begin to heal. It is brutal and painful, but with each small step comes a transformation. You realize fundamental truths about yourself and inevitably revaluate the world in new ways. You literally have to reexamine everything again, including spirituality, perspective and life choices.

I was fortunate to have a great group of friends and family, a support group and other resources to help me. My daughter’s strength and love also inspired me. As we grew stronger, we became able to live again. We still miss my wife and her mother, and we will every day. But ultimately, it came down to choosing to live or letting yourself die, inside and out. You choose love over fear, clarity over clouds, and hope for the best in yourself and the world around you.

Work and art became a huge outlet and asset to my healing. I was able to create numerous music videos for Keane, Foo Fighters, The Fray and Bruce Springsteen. I even did some episodic work with my family at “Cold Case” and was fortunate enough to put many personal feelings, ideas and emotional energy into the show’s stories and imagery. In doing so, I found filmmaking a great, healthy and cathartic place for my processing. Art is truly for the spirit.

As I began to reexamine and explore the films I had wanted to make or was attached to, I felt disconnected to many that seemed one dimensionally darker. I was less drawn to anything devoid of what I felt was a newly emerging sense of hope for something else — a more balanced worldview of humanity and some degree of positivism.

I re-read Stain and met with Albert. I was honest about the story and what still drew me to it. Fundamentally, it’s about a man who is given a new lease on life and the idea that no matter what the cause — a mistake, a choice, whatever the case may be — life sometimes leads us places for a reason we never realize. Deep down, I knew that making the film would become part of my life experience rather than a job.

I was also drawn to this film and its story’s possibilities through the characters, all of whom are dealing with loss. Esperanza and her relationship to her lost love, Leo, connected deeply with me, as memory and family are big themes in my video work. Young Millie, and her selective mutism due to the loss of her father, spoke to me, as did her mother Dawn’s struggles as a young single parent. Her character has a selflessness and ability to love despite the consequences of Henry’s presumed fate, which I found moving and romantic and profound. Albert has drawn original human hearts that are unafraid to be honest, earnest and sincere. Whether that is fashionable or cool or indie or mainstream, I don’t really know, as it’s beyond my control. All I knew in reading the script was that it felt good to me.

I believe in these characters and this story and its themes. The things I want to say to the world are in this film, and not for me to underline or exclaim. I loved its mixture of heart and humor and the tones that reflected the world I saw and wanted to see, in my daughter’s life and my future. Life is so incredible. It can be gorgeous and awesome and tragic and unexplainable and sublime and horrible all at once. For me, it is how you see it, how you choose to experience it. The rendering of the film and its choices are from the heart and from a genuine place. My own life experience colors it, as any filmmaker’s life colors the films he creates. But it is colored, in every frame, by the lives of all who touch it.

I approached the film from a place of honesty and my own truth. Every choice is subjective, and I wanted to make a film in which I could put my feelings — the burgeoning laughter, the quiet of reflection, the sadness, the fragility, the need to connect and the wonderment at our own smallness in the big picture. 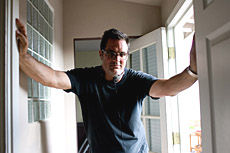