Henry Poole Is Here and other films that depict inexplicable events

We live in an age hungry for extraordinary events. The Germans have a word for this — wundersucht, which means "a passion for miracles." Thousands of pilgrims flock to places that report healings of terrible diseases or supernatural phenomena such as weeping statues or the face of Christ appearing in strange places.

Polls reveal that 83 percent of the American public believe in miracles. These events defy logic and the consensus view of reality. Commonly associated in the history books with the ardent faith of saints, in the movies, miracles often show up in the lives of ordinary people. It may be that some inexplicable event turns their lives upside down. Or sometimes the miracle may simply be that the characters act out of love for one another and are willing to ask for and receive help.

We've found some movies about miracles in our reviews database. But first, here are a few soul-stirring quotations to frame this exploration.

In Henry Poole Is Here, a depressed man with a terminal illness moves into his childhood neighborhood. He just wants to be left alone but then his neighbor sees the face of Christ on the stucco wall of his house. Soon people are praying in his backyard and claiming that touching the wall has cured them. Henry doesn't want to admit it, but he's in need of a miracle too, and it comes in some unexpected ways. Read our full review plus a statement from director Mark Pellington. 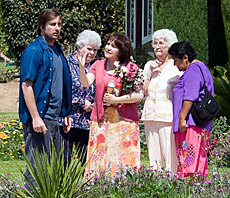