Statement from Ngawang Choephel Director of Tibet in Song

A letter from the director of the documentary.

Ngawang Choephel is the director, writer, and producer of Tibet in Song, his feature debut. A musician and graduate of the Tibetan Institute of Performing Arts in Dharamsala, India, he released his first album of Tibetan folksongs, Melody in Exile, in 1993. After starting his career as a music teacher in India, he traveled to the US as a Fulbright scholar at Middlebury College (Vermont) where he studied international music as well as filmmaking. In 1995 he went to Tibet to record and videotape Tibetan folksongs in order to make this film.

Chinese authorities arrested Ngawang in 1995, falsely charging him with espionage. He was sent to prison without a trial, where he served 7 years of an 18-year sentence. A highly publicized international campaign that began with his mother's solitary protests, and later involved musicians such as Annie Lennox, the Tibetan Freedom Concert and US Senators James Jeffords and Patrick Leahy from Vermont, finally secured his release in 2002.

A Letter from Ngawang Choephel

Most of the nations of the world have already passed through their dark periods. Only a few, like Tibet remain, struggling to endure on the dark journey for freedom. Since 1949, Tibetans have been subjected to some of the longest periods of imprisonment, and mass killings in the world. My own friend, Rinzin Wangyal, was killed in 2005 in Drapchi Prison. In March 2008, Tibetans inside Tibet took matters into their own hands, and over 200 of my countrymen were killed as a result.

They had no choice but to make this sacrifice of their lives, because the world at large has not been able to see clearly the situation inside Tibet. Even as Tibetans continue to die, not only for the cause of freedom, but for the basic right to practice their own Tibetan cultural traditions, no world leaders have expressed deep concern by going to Tibet and seeing for themselves. As such, the issue remains isolated. World leaders continue to volley with China on the issue of Tibet, as a bargaining piece for their own mutual interests, saying "We accept Tibet is part of China" when needing to please the PRC, and saying "The situation in Tibet is a human rights violation" when they need leverage. This is the world I was released into in 2002, after serving my term as a political prisoner in Tibet.

Since my release from prison in 2002, I have been working continuously on directing and producing my film Tibet in Song. I didn’t tell the details of my prison experience as soon as I was released not only because I needed time to prepare mentally to let the details of my experience come to the surface, but also because I realized that there is a story that must be told that is larger than my own. It is the story of Tibetans themselves who have all experienced the suffering of being under Chinese rule. I felt that the best way to make an impact on this issue, was to tell our story through this documentary film.

I am happy that I finally have the opportunity to thank all of you who supported me and my mother while I was in prison for making this film. Without the support of those of you throughout the world who understood me, I would not be able to tell this story. I would like to thank those of you who believed in my determination to make this film, and who continually supported me and encouraged me, not only financially but also by giving strong moral support by believing in me and remaining in touch with me throughout the years. I will continue to work in my lifetime for the preservation and promotion of Tibetan culture, and I hope that you will continue to support me and share my vision of what Tibetan culture has to offer.—Ngawang Choephel 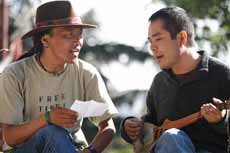