An Interview with Margarethe von Trotta

Born in Berlin, Margarethe von Trotta is one of the leaders of the New German Cinema movement, as well as one of the world's most important feminist filmmakers. From the early sixties, after returning to Germany from Paris (where she encountered the Nouvelle Vague and the films of Ingmar Bergman), von Trotta pursued acting, working closely with both Rainer Werner Fassbinder and Volker Schlöndorff, who became her husband in 1971.

Her first films include The Lost Honor of Katharina Blum, co-directed with Schlöndorff, and The Second Awakening of Christa Klages, which introduced many of the themes that she would return to in her later films: female bonding, sisterhood, and the uses and effects of violence. In 1979, von Trotta began a cinematic trilogy that cemented her reputation as one of the leading directors of the German new wave: Sisters, or the Balance of Happiness describes the life of two sisters in a symbiotic relationship that weighs heavily on them, even after one of them commits suicide; Marianne and Juliane (winner of the Golden Lion at the Venice Film Festival) again portrays two sisters; and Rosa Luxemburg, an epic portrait of one of the leading figures of European socialism.

Despite being seen as a leading feminist director, Margarethe von Trotta rejects the description of her films as the product of "woman's filmmaking," arguing that it confines one to a ghetto of sorts. She believes that she should instead be seen as a filmmaker who is at once a woman, as well as a director who examines the interior of the feminine personal as well as the exterior of the political. Von Trotta is a Professor of Film at the European Graduate School in Saas-Fee, Switzerland, and remains an important personality of German cinema.

When and where did you first come across the name of Hildegard von Bingen?

In the 1970s, women involved in the Women's Movement were looking for historical role models. At that time there were few female role models. History was written by men and made by men. The history of women was not told, and women were marginalized, as if they had never played any role. We came across Hildegard von Bingen in this search for forgotten women. Sometime thereafter, a lot of people were becoming involved with alternative medicine and were looking into the effectiveness of medicinal plants. It was then that Hildegard's name resurfaced anew. So, I had already become interested in her before writing the screenplay for Rosa Luxemburg. That was in 1983, and soon thereafter I asked myself whether her life wouldn't be good material for a movie. I even wrote a few scenes, but I thought that there wouldn't be a producer who was ready to make this movie. So, I shelved it for a while.

What was the draw for you personally to make a movie about this medieval nun?

Well, first of all she belongs to our early history, and she was, as one would say nowadays, multitalented. She was a visionary, but at the same time fully grounded. She was a highly intelligent woman who nevertheless had to hide her light under her nun's habit, because, as a woman and a nun, she was not allowed to express herself publicly. The only chance for her to do so was as a visionary acknowledged by the Pope, but even in that she was an exception. At the time there were many eccentric women who drove themselves to religious ecstasy, and experienced their communion with Christ in this delirious state. Hildegard von Bingen experienced her visions consciously, and with a clear presence of mind. She must have had a very strong subconscious that showed her how to assert herself. Of course she believed in God, and that God sent these visions to her. Everyone believed in God, the Devil, Heaven and Hell. What is interesting to me is how Hildegard von Bingen used her visions. As a woman and a nun, she was actually unknown and subordinated — one had to remain unseen — and, furthermore, she was locked up in a convent, which she was not permitted to leave after taking her vows. She "used" the visions in order to become known as a seer. This step also entailed a huge risk for her; she could just as well have been excommunicated if she hadn't been believed, and had instead been judged as possessed by the Devil.

How did she get men to pay attention to her beliefs?

Using her diplomatic skills, because she understood men and their vanities, she turned to Bernard of Clairvaux as a "lowly woman and servant." So first she was allowed to publicize her visions, and then — this is the greater, more revolutionary step — she managed, through these visions, to be able to found her own convent. She left Disibodenberg — the province, as one might say today — and moved to Bingen on the Rhine, which at the time was a "traffic intersection" near the important Archbishop of Mainz. Pilgrims and traders came through and visited the convent. She was closer to the world; she received news of the latest developments in medicine, and encountered the knowledge of her time.

How is she significant or relevant to the present day?

The film addresses two issues that are important to us today. One is the holistic approach to medicine. She once said, "First the soul must heal; then the body will follow." The other was the warning that the elements could turn against us. At the time, people spoke of elements; today we speak of nature turning against us, or destroying us, if we don't protect it. Both of these points make her relevant. Then of course we have her incredible opus as a composer; she wrote over ninety songs.

Can you talk about the "lyrical drama" scene in the film? It really stands out against the dark, monastic tone of the rest of the film.

This scene, which is an excerpt from Hildegard's lyrical drama Ordo Virtutum, is genuine; I found it in the historical accounts. On certain holidays, her nuns were allowed to wrap themselves in white silk gowns, wear jewelry, let down their hair, and decorate themselves with garlands. It must have been a very happy and innocent sisterhood. Hildegard von Bingen said that Heaven knew no ugliness, and because as virgins they belonged to Heaven, they should also rejoice in their own beauty. There were two directions within the Benedictine Order: one, which was very severe and ascetic, to the point of self-castigation, which Hildegard refused; and the one that embraced life, that also wanted to draw happiness from religion. I tried to show this through her Ordo Virtutum.

Your movie refuses to take up of the notion that one comes closer to God through suffering, particularly through a scene after Jutta von Sponheim's death, in which Hildegard discovers that she is wearing a belt of thorns.

Exactly. In a short scene beforehand, I show Hildegard, as a child, watching Jutta von Sponheim flagellate herself in the hopes of coming closer to God through her pain. The discovery of this self-castigation shook Hildegard von Bingen tremendously. She never flagellated herself, and never asked anyone else to. She was also opposed to severe fasting. For her, faith was intertwined with happiness, and the love of mankind.

What is the appeal for you in placing strong women at the forefront of your films?

The figures that appeal to me are always strong women who also have moments of weakness;therefore, I never try to make heroines out of them. Instead I show how they fought to find their own way, how they put themselves out there, and how much they had to swallow in order to find themselves. I am fascinated by how they overcome obstacles in order to achieve their goals. Hildegard von Bingen had a dream of founding her own abbey, and she suffered a lot of setbacks in the process. The moments of her greatest weakness are when the nun Richardis is to be taken away from her. In this situation, she behaves either like a small, abandoned child, or with fury. This conduct is all recorded in her letters. And it is precisely these moments of extreme self-abandonment that I find so beautiful, surprising, and contradictory. Hildegard von Bingen demands for herself what she usually gives to others. I absolutely did not want to portray her as a saint.

What writings or records did you use?

Among other things, there is a biography written during her lifetime; not by her, but in part dictated by her, which documents her life's journey from birth until old age. I also used her writings as documentation: for example, the Scivias, her first book of visions, and two others on naturopathy and healing. I also made use of her correspondence with Emperor Barbarossa, various popes, and abbots and abbesses of other convents. There is also the Rule of St. Benedict, which contains a lot of information about monastic life at the time. A friend of mine, who is a medievalist, told me that people kissed each other on the mouth when they concluded a contract, and to celebrate other meetings as well, so I included this. They weren't as puritanical as we think; instead they had a much less inhibited relationship to their bodies and the physical world.

What role does Hildegard's music have, and what criteria did you use for choosing it?

I chose the songs that I liked the most, that touched my heart and gave me goose bumps the first time I heard them. Salome Kammer, the actress and singer, who also acted and sang in Edgar Reitz's Heimat, sings two songs dressed as a nun. I didn't want to take music from a recorded CD, which always makes the music sound so flat. Of course the songs also had to fit the respective scenes in terms of their content. Barbara Sukowa, who in the last twenty years has performed more as a singer than as an actress, also had the opportunity to sing her own part in the Ordo Virtutum.

How did you recreate the atmosphere of the convent so vividly?

Axel Block, the cinematographer, and I discussed the look of the film for a long time. We were in agreement that we did not want to film it glamorously. The film was not meant as some saint's portrait to put in your Bible or hymnal. This time is very far away from ours, but the people should nevertheless feel close to us, and alive.

This interview is used, courtesy of Zeitgeist Films. 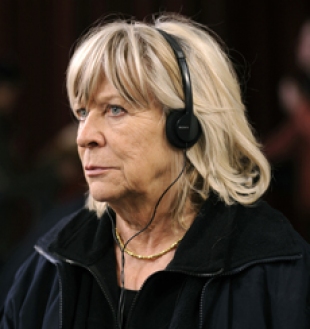