Vision: From the Life of Hildegard von Bingen

Hildegard of Bingen (1098–1179) stands out as one of the most visionary and incredibly gifted spiritual women of all time. She was an abbess and founder of a Benedictine religious community; a teacher and preacher; a composer of music and the creator of an avant-garde morality play; a poet and artist; an herbalist and pharmacist; and a sensitive recipient of God-sent visions with insights about the Bible and the natural world. Yet for 800 years her ministry and the magnificent sweep of her talents and abilities went largely unknown. It is only recently, thanks to the rising tide of interest in women's spirituality, that her story has come into the light of day.

In his book Illuminations of Hildegard of Bingen, Matthew Fox lists eight reasons why this visionary speaks so poignantly to spiritual seekers of our time:

1. She was a woman in a patriarchal culture with a male-run church who had to work hard to be heard and have her wisdom and insights taken seriously.
2. Hildegard was a lover of the natural world and an ecologist of the first order who also was enchanted by the wonders of science.
3. She demonstrated a respect for the multiple mysteries of the human spirit and a "psychic cosmology" that honors the interdependence of all things.
4. Hildegard pioneered a mysticism open to other religions and ways of life.
5. She inspired other sisters and monks to work for the revival of Christianity and to follow their own paths with courage and hope.
6. Hildegard was a scout, seeking new territory with her ecological consciousness and respect for plants, animals, rocks, and trees.
7. She was a lover of learning with a holistic education practice and a theology in process.
8. Hildegard was a healer who broke down the walls between science and religion, the mind and the body, men and women, matter and spirit.

Fox ends his tribute to this twelfth-century wonder-worker with the following question:

"Has there ever been a time in human history or the history of the planet when illumination, light, and wisdom, were needed more than now? Can anyone be better equipped to lead us than the neglected one, St. Hildegard, who in fact defines the ultimate act of illumination as compassion?"

We tip our hats to the German film director and screenwriter Margarethe von Trotta (Marianne and Juliane, Rosa Luxemburg, Rosenstrasse), the creative force behind Vision — a soul-stirring and daring drama, which is admirably carried by the immensely gifted actress Barbara Sukowa in the role of Hildegard. Shot in the medieval cloisters in the German countryside, the film uses music written by Hildegard of Bingen as part of the score.

As we watched the life of this extraordinary woman unfold before our eyes, we tried to remember what inner strength it took to express creativity, to stand by a vision scorned by others, to follow conscience when things seemed to be collapsing all around.

At the age of eight, Hildegard's parents give her to the anchoress Jutta of Sponheim (Lena Stolze) for instruction. (In Christianity, an anchoress is a woman who chooses to withdraw into a solitary life of prayer and mortification.) Living in a home attached to the monastery of Disibodenberg, Jutta has a daughter who resents Hildegard's intrusion and is jealous of her connection with her mother. Both girls are lectured on the sin of envy and the healing powers of love, and 30 years later, both have become nuns in a small monastic community. When Jutta dies, her body reveals the marks of flagellation and self-castigation. Hildegard is chosen to be her successor.

Shortly after taking on the duties of prioress, Hildegard's visions intensify — usually accompanied by body breakdowns due to the power of her encounters with a "Living Light." Hildegard describes these mystical experiences to Volmar (Heino Ferch), her monk friend, who takes the matter to the Abbot of Disibodenberg (Alexander Held). At first this rigid chauvinist is skeptical about Hildegard's visions, but he changes his mind when he sees them as bringing more pilgrims to the monastery and more contributions from wealthy Germans. When some prestigious priests and theologians question Hildegard about her visions, they are distressed to learn that she is wakeful and alert when she receives them, and they are convinced that God would not lower himself to grant special conversations and teachings to a woman. Luckily, Hildegard's visions are declared orthodox by Bernard of Clairvaux and the Archbishop of Mainz, and Volmar is appointed to transcribe the messages from God.

In a series of small but effective vignettes, we are treated to examples of this extraordinary Benedictine nun's protean interests and talents. For example: Hildegard outside with the nuns, training them in the herbal capacities of plants; her love of learning in her joyous response to Volmar's gift of books filled with the latest knowledge; or her excitement studying the findings of philosophers and scientists. The same enthusiasm ripples through her artistic creations — as a musical composer and the creator of a musical morality play about an encounter between the soul and the Devil. In each of these adventures Hildegard of Bingen speaks to our times with her actions.

As more nuns flock to her, Hildegard receives a Divine message directing her to move to Rupertsberg near Bingen. The Abbot of Disibodenberg opposes the move but is outmaneuvered by the Archbishop of Mainz and a wealthy woman who has brought her young daughter Richardis (Hannah Herzsprung) to join the community. This newcomer wins Hildegard's attention and loyalty with her ability to read and serve as another recorder of her visions. Richardis vows that she has no other reason for living than to be in Hildegard's presence, and eventually this relationship reveals Hildegard's selfish nature and her attachment to this young devotee. Every saint has a shadow side and this film wisely exposes Hildegard's.

Hildegard of Bingen as depicted in Vision shows us how to respond to God's direct communications, to stand up for our faith, to take risks, to love learning, to express our creativity, to stay connected and close to nature, and to honor the ocean of mysteries of life and love that we live in. We hope that you will see yourself as a soul companion to Hildegard of Bingen and let her energy and spirit open your heart to fresh possibilities.

Special features on the DVD include the Telluride film festival tribute and a Q & A with director Margarethe Von Trotta by actress Barbara Sukowa and professor Annette Insdorf; writer Gary Giddins' Telluride interview with Von Trotta; and a conversation at the Goethe-Institute in New York with von Trotta and writer Robert Boyers. 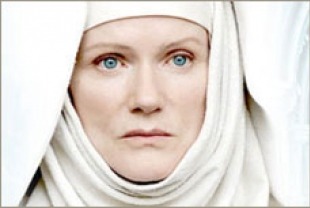 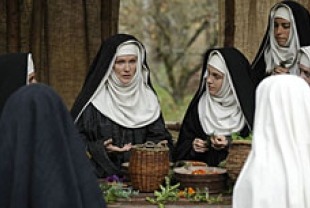 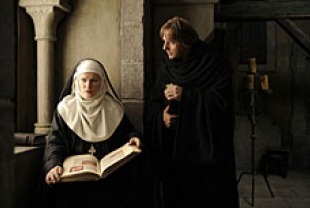 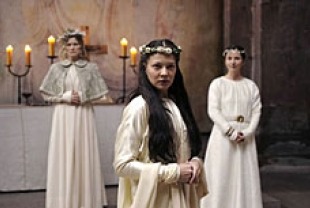 Collection of quotations by Hildegard of Bingen

Naming the Days feature for Feast Day of Hildegard of Bingen