An Interview with Barbara Sukowa

Born in Bremen, Germany, actress Barbara Sukowa began her theater career in Berlin in 1971. She played leading roles in productions in Germany and across Europe including Ibsen's The Master Builder, and Shakepeare's A Midsummer Night's Dream, As You Like It and Othello. Currently she is starring in a touring production of Heiner Mueller's Quartett.

In the U.S., Sukowa is known for her performances in some of the most iconic films of the New German Cinema. Her breakthrough role was "Mieze" in Rainer Werner Fassbinder's monumental Berlin Alexanderplatz (1980), which earned her the German Best Young Actress Award. Working again with Fassbinder, Sukowa received the German Film Award (Gold) for her performance as the title character in his 1981 film Lola. In addition to Vision — From the Life of Hildegard von Bingen, Sukowa has collaborated with director Margarethe von Trotta on five other films, most notably Marianne and Juliane, for which she won Best Actress at the 1981 Venice Film Festival; and Rosa Luxemburg, for which she received the Best Actress honors at the 1986 Cannes Film Festival. She has twice received the Bavarian Film Award, most recently for Vision. In 2008, she won Best Actress for The Invention of the Curried Sausage at the Montréal World Film Festival. Sukowa's other films include work by internationally acclaimed auteurs such as Michael Cimino, Lars Von Trier, David Cronenberg, Volker Schlöndorff, Agnieszka Holland, and Tim Robbins; as well as projects directed by Serge Gainsbourg, actor John Turturro, and artists Cindy Sherman and Robert Longo (who is also her husband).

Barbara Sukowa has also developed a career as a classical music narrator and singer. As a narrator, she has performed Schoenberg's Pierrot Lunaire with the Schoenberg Ensemble under Reinbert de Leeuw; and with the Brentano Quartet and Mitsuko Uchida at Carnegie Hall. She has also worked with the Berlin Philharmonic, the Vienna Philharmonic, the Los Angeles Philharmonic, and the St. Louis Symphony; and with such renowned conductors as Claudio Abbado, Esa Pekka Salonen, and David Robertson. Other music performances include Arthur Honegger's Jeanne d'Arc au Bûcher; Kurt Weill's The Threepenny Opera; and the U.S. premiere of Michael Jarrell's Cassandre at Carnegie Hall. Sukowa sang in the U.S. premiere of Im wunderschönen Monat Mai ("In the Wonderful Month of May"), de Leeuw's adaptation of love songs by Schubert and Schumann, also at Carnegie Hall. The 2007 recording (released by German label Winter & Winter) received Edison and Echo Klassik Awards, and a Grammy Nomination. She has also narrated recordings of Prokofiev's Peter and the Wolf, Mendelssohn's A Midsummer Night's Dream and Schoenberg's Gurrelieder.

Sukowa is the lead singer of the band the X-Patsys, which she founded with visual artists Jon Kessler and Robert Longo. In summer 2010, Winter & Winter released their album Devouring Time: Barbara Sukowa and the X-Patsys. She lives in Brooklyn.

Hildegard von Bingen was a great visionary for her time; does she still have something to teach us?

There are efforts and endeavors everywhere to approach religion and spirituality from a scientific perspective. It is in the context of this movement that interest in Hildegard von Bingen has sprung forth and grown.

How did you get a sense of Hildegard von Bingen on a personal level?

Hildegard von Bingen was a woman who took something for herself that society at the time denied her. Her social power as a nun and abbess in a convent was actually very limited. She transcended these limits through her visions, and managed to have the institution of the Church acknowledge them. She carved out an independent space for herself. This has a lot to do with the fact that she was always sickly as a child. Here I sense a point of contact with Rosa Luxemburg, which I also worked on with Margarethe von Trotta. Rosa Luxemburg was also sick as a child. Many people who spend a lot of time in bed as kids, and are unable to experience the outside world, develop a very strong inner life and sense of fantasy. This was the case with Hildegard von Bingen, who was very intellectually vital, determined, persistent, and powerful despite her physical weakness. She was a fighter who knew how to achieve her goals, and who often made herself appear small in the male-dominated world of the Church in order to be heard. She was able to insinuate herself very delicately, and in my opinion she also knew how to manipulate very well.

What was the greatest challenge for you in performing this role?

To embody a woman who stood very firmly within a twelfth-century framework of beliefs — in which people believed in Heaven and Hell, in condemnation and in resurrection. The difficulty is that this woman lived 1,000 years ago, and obviously it's not possible to enter the mind of someone who thinks like that. So, you look for material that is resonant today, and pull something out of a persona that relates to you personally. I cannot claim to represent this woman, or anyone else, from that age.

What was your involvement with the music in the film? You have been a successful singer yourself for many years.

I love this music. It's beautiful, and a little unusual for the time; there is something very serene and spiritual about it. In her compositions, Hildegard von Bingen did not follow the rules of the time; whether she did so consciously, or simply didn't know the rules, we can't exactly tell. Anyhow, it was a pleasure for me to sing these parts.

Do you approach historical material any differently from something contemporary? Is one easier or harder than the other?

Actually, hard or easy doesn't have so much to do with material being historical or contemporary. Hard or easy has everything to do with how close you feel to the character, or how much you may have to change things in order to understand the character — this change may be something you have to break through within yourself. In a historical film, you try to familiarize yourself with the history, as well as peoples' limits. In preparing for this role, I looked at old paintings, and made notes of how people folded their hands, what kind of clothing they wore, and what poses they affected. To that extent, yes, there is a difference between playing a Hildegard von Bingen and a woman of today.

You have often worked with Margarethe von Trotta. What is your connection across the decades?

Certainly a friendship. It is always a special treat for me to work with Margarethe von Trotta, because she used to be an actress herself; she truly understands actors, and so she understands both positions. She is helpful and listens very carefully. I also find her very exciting as a person. On the one hand she is very intelligent and intellectually minded, and on the other, very warm and open to anything, even the irrational. When she began to make films, women still had to fight hard within the male-dominated world of cinema. So, sometimes she came across as harder than she is, because of how much she had to assert herself. Her other, more humorous side has come through even more so over the years.

This interview is published courtesy of Zeitgeist Films. 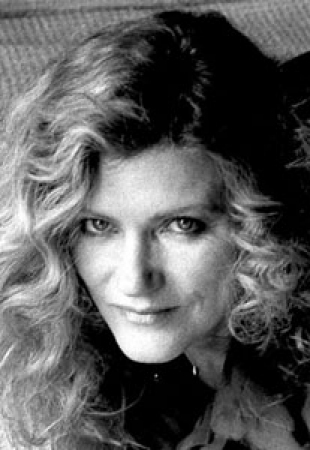