Directed by Tim Burton
A bittersweet fairy tale set at death's door that salutes the liberating power of true love.

What a joy to slow down and experience the nuances and the oddball delights of this stop-motion-animated feature by Tim Burton! So many of today's animated features are speeding things up and as a result it's often difficult to sort through our emotions while zipping from one scene to the next. This story is loosely based on a Russian fairytale with a screenplay by John August, Caroline Thompson, and Pamela Pettier with original characters created by Burton and Carlos Grangel. There are several lively musical numbers by Danny Elfman that add a bit of spice to the proceedings. Those who are fans of the director and his wonderfully realized tales in The Nightmare Before Christmas and James and the Giant Peach are sure to join us in singing praises to this enchanting movie.

Victor Van Dort (voiced by Johnny Depp) is a shy and jittery young man whose parents (Tracey Ullman, Paul Whitehouse) in a late nineteenth century European town have arranged for him to marry Victoria Everglot (Emily Watson). Class differences separate the two families: her snooty parents (Joanna Lumley, Albert Finney) look down their noses at his family of nouveau rich fish mongers. When Victor and Victoria meet for the first time, she is swept off her feet by the beauty of his piano playing in her large home. But things go downhill from there as the nervous young bridegroom just can't get the vows right during a rehearsal session. Pastor Galswells (Christopher Lee) states that the marriage won't take place unless Victor gets his act together. Walking alone in the forest at night, the young man practices his vows by placing the ring on a twig and suddenly a hand grabs his arm. Presto! The Corpse Bride named Emily (Helena Bonham Carter) rises from her grave with joy in her heart that she has been wed at last. She immediately takes Victor with her to the underworld — a lively place populated by skeletons and wisecracking creatures who seem genuinely pleased by the visitor who still breathes. With the disappearance of the bridegroom, a nefarious wedding crasher named Lord Barkis Bittern (Richard E. Grant) volunteers to marry Victoria who still holds out for Victor's return.

While some parents might be scared off by the characters from beyond the grave, it is worth reminding these folk that in many Hispanic cultures, the Day of the Dead is a time of great meaning and frolic as families gather around the graves of those who have died and eat and share memories from the past. The same carnival spirit pervades the underworld and may help children overcome their uneasiness in the face of death similar to Halloween celebrations. But even more than that, Tim Burton's Corpse Bride touches the heart with its tender lionization of love as the most precious treasure in the land of the living.

The DVD includes the featurettes "Inside the Two Worlds," "Danny Elfman Interprets the Two Worlds," "The Animators: The Breath of Life," "Tim Burton: Dark vs. Light," "Voices from the Underworld," "Making Puppets Tick," and "The Voices Behind the Voice." The DVD also includes pre-production galleries 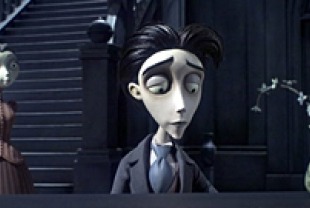 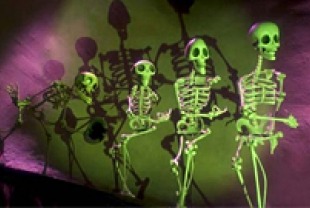 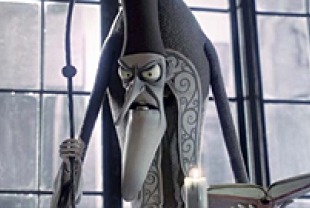