Directed by Alan Parker
Sophisticated, realistic, and affecting portrait of a family's turmoil following a divorce.

In the opening scene of this movie, writer George Dunlap (Albert Finney) is getting ready for an International Book Awards dinner in San Francisco. Faith (Diane Keaton), his wife of 15 years, is upstairs dressing with the assistance of their three youngest daughters. Sherry, the oldest, picks up the receiver of the telephone and hears her father talking to a woman. At the awards banquet, George pays tribute to his wife, but that night they sleep in separate rooms. Things explode in the morning. Faith accuses him of adultery, and he walks out with the bags she has already packed.

For some veterans of marital conflicts, separation and divorce has become a necessary rite of passage into adulthood. For others, it is often a painful, muddled, and protracted guerrilla war in which the battle lines are never clearly defined. George moves in with Sandy (Karen Allen), his young lover who has a son of her own from a previous marriage. He keeps in touch with three of his daughters by driving them to school; Sherry refuses to see or talk to him.

Shoot the Moon boasts a sophisticated, realistic, and affecting screenplay by Bo Goldman (Melvin and Howard). It offers us an incisive look at the sharp edges of divorce and the often unresolved anguish it causes to all parties involved. Faith is deeply hurt and, in one terribly sad scene, she weeps over her lost marriage while taking a bath. George's insensitivity is apparent when he shows up at the house one day with a policeman. Everyone is uneasy. All the writer does is pack his books.

Faith begins an affair with Frank (Peter Weller), a contractor who fulfills her longtime dream to have a tennis court on their property. Even as she makes some positive strides toward rebuilding her own sense of dignity and worth, George grows increasingly neurotic and violent. In an attempt to see Sherry, he breaks down the door and physically assaults her; she fends him off with scissors.

Director Alan Parker draws out excellent performances from all members of the cast. He again proves his special knack for working with child actors — the Dunlap daughters are all vividly realized characters struggling to understand their parents' separation. Albert Finney's portrait of George is a multileveled one which conveys his disorientation, helplessness, and deep anger. Diane Keaton's depiction of Faith is rich and well nuanced.

In Diary of a Divorced Mother, Marilyn Murray Willison writes "Postdivorce existence is a PhD program in emotional survival." Shoot the Moon is a racking film which explores this subject with sensitivity and artistic skill. George and Faith have trouble letting go of each other; they want to remake the past. Still, they can't find a way to go into the future together. 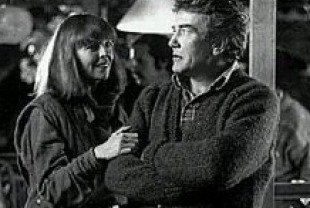