Directed by Noah Baumbach
An open, honest film that allows us to enter and freely share in the emotional upheavals of all the members of a dysfunctional family.

The Beekman family is coming apart at the seams in 1986 Brooklyn. Bernard (Jeff Daniels) is an academic and once-celebrated novelist who has a tendency to exaggerate his own importance. For example, he refers to Kafka as "one of my predecessors." Currently, his creativity is at a low ebb just as his wife, Joan (Laura Linney), is about to publish her first novel.

After 17 years of marriage, they are separating. He is moving across the park to another place, and she is keeping the brownstone. Bernard cannot forgive her for having had several affairs. Their two sons are not taking the separation very well at all. Sixteen-year-old Walt (Jesse Eisenberg) feels closer to his father and mouths his opinions about F. Scott Fitzgerald and other famous writers. He is very angry at his mother and blames her for breaking up the family. Twelve year-old Frank (Owen Kline) knows that his father has a bond with Walt that he can never match; he sides with his mother. Upset about everything in his life, he starts to drink beer regularly and masturbate, spreading his semen on library books and on a locker in school.

The Squid and the Whale is written and directed by Noah Baumbach. It won two honors at the 2005 Sundance Film Festival — the Waldo Salt Screenwriting Award and the Best Dramatic Directing Award. This very humorous drama reveals the emotional turmoil of a dysfunctional family.

After he moves out, Bernard is quite upset to learn that Joan is dating Ivan (William Baldwin), Frank's tennis instructor. He thinks this fellow is a "Philistine," an ignorant man who is neither well read nor knowledgeable about important matters. Probably as a ploy to retaliate, Bernard invites Lili (Anna Paquin), a sexy young woman in one of his writing classes, to move into a room at his place. When Walt starts dating a nice young girl (Halley Feiffer), his dad offers him chauvinistic advice that makes him feel even more self-conscious than he already is. To make matters worse, he is forced to see a therapist when it is discovered that he has performed a Pink Floyd song at a high school talent show and claimed it was his own creation.

Jeff Daniels is superb as the grumpy Bernard, whose rigid ideas create a world of separations. In the beginning, we see him on the tennis court playing ferociously. Later, in a ping-pong game with Frank, he can't accept defeat. In one of the best scenes, Bernard takes a futile stab at reconciling with Joan. His rationale is that because of his experience cooking for the boys during their visitations, he has learned the secrets of preparing veal cutlets and is a new person. Joan laughs uproariously at his proposal.

Jesse Eisenberg, who was so good in Roger Dodger, pulls off another magical depiction of adolescent angst. Walt's trip to Central Park's Natural History Museum to see an exhibit of sea monsters locked in battle turns out to be quite healing and cathartic. The Squid and the Whale is like going to an open house and discovering that the family is still there with all their emotions on display, just waiting for you to empathize with them. The experience, thankfully, is filled with both wit and poignancy. 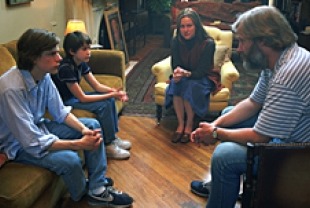 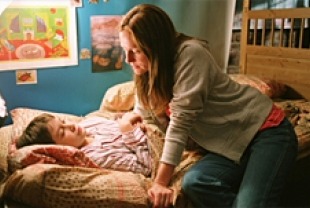 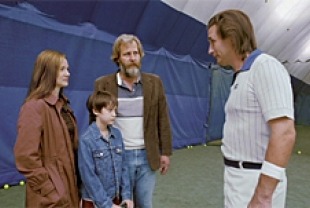