Directed by Michael Haneke
A sharp-edged thriller about the refusal of privileged members of the winning class to trust others or to take responsibility for their actions.

In large cities across the world, there are enclaves of what some social observers have called the "winning class." These people are successful professionals with top-rate jobs, plush homes, and all the perks that come with life on the fast track. Many of them look down their noses at the little people (other races and classes) who get in their way and irritate them to no end. They are quick to defend their right to privacy and to ample security for the protection of their lives of privilege.

Michael Haneke (The Piano Teacher) is an Austrian writer and director who has a special interest in the anonymity, conflicts, loneliness and disorder of city life. In Code Unknown, he dealt with a group of people in Paris trying to cope with the exigencies of modern life, where predators and victims of hate abound. Living with strangers and outsiders who frighten us is not easy. In Hidden, Haneke probes the pride, class consciousness, and racial enmity of a man whose happy life is upended by a series of intrusive and upsetting events that undermine his life.

Georges (Daniel Auteuil) is the famous host of a popular TV talk show about books. His wife Anne (Juliette Binoche) works in publishing. They live in a fancy house with their twelve-year old son Pierrot (Lester Makedonsky). Then they receive a video with two hours of footage showing them arriving at their house at different times. At first they think it's a childhood prank, especially since it's accompanied by a macabre drawing of a child with a swath of blood streaming out of its mouth. But when another tape shows up, they call the police. This provides no solace, however, as they are told that just having someone put your house under surveillance is not a crime; the police can do nothming until there has been an open threat against Georges or his family.

One of the first things lost in an unequal society where there is a sharp division between the majority and a small group of winners who hold power, money and prestige is trust. People at the top have no reason to trust those below them, and those who are considered losers have little hope that they will every be treated with respect or fairness by those on the top. This tension is perfectly captured in a scene where Georges and his wife are about to cross the street, and Georges is almost hit by a black skinned man on a bicycle. Georges loses his temper and starts lashing out at the man. A fight between the two of them is only averted when Anne states that both were in the wrong by not looking at what was happening on the street. In this telling scene, we see that Georges is quick to blame others and refuses to take responsibility for his own actions.

In a dream, Georges sees Majid — the son of Algerian farm workers who were employed by his wealthy family. When Majid's parents were killed while participating in a demonstration, Georges' parents were ready to adopt him. But Georges told his parents lies about Majid, and he was sent away. When Georges visits his bedridden mother (Annie Girardot), she seems to have completely forgotten the incident. Although she senses that something is troubling her son, he refuses to tell he about the tapes and his own fears about the person who is tormenting him.

Another revealing clue about Georges' true nature is that he suspects Majid is behind the surveillance tapes and drawings. He visits him and they talk about the past. Georges is convinced that the Algerian is behind the tapes as an act of revenge for what Georges did to him in their childhood.

When the television celebrity returns home, he refuses to tell Anne where he's been or answer any of her questions. She is rightly astonished at the realization that in his increasingly insular existence, he doesn't even trust her. Another sign of Georges' selfishness is his inability to understand Anne's dismay over his secretiveness.

Those looking for a tidy conclusion that reveals the identity of the person sending the tapes are bound to be disappointed by the film's ending. But Haneke is after bigger fish here, as revealed in Georges' statement, "Terrorize me and my family and you'll regret it." The film shows the inability of the winning class to take moral responsibility for their own actions, and their projection of blame onto others who have committed the gravest crime of all — bringing discomfort into their lives. We need more movies that bring the flaws of the winning class out into the light of day. Keeping these things hidden is just what the powerful want, whether they reside in Paris, New York City or in the corridors of Washington, D.C.

Special DVD features include: a documentary on director Michael Haneke and behind the scenes of Cache. 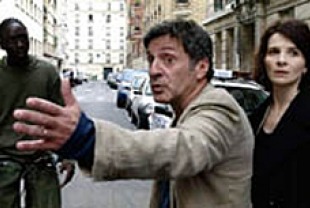 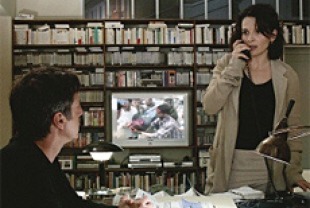 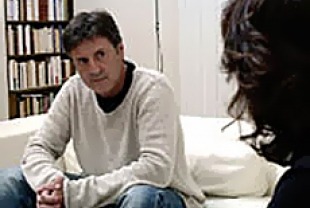