This totally enchanting screen adaptation of Jane Austen's classic novel begins in a meadow just before sunrise where the birds are merrily chirping amid the sound of peaceful flowing water. Is anyone there to savor the moment? Yes, but for Elizabeth Bennett (Keira Knightley) this beautiful setting is only a backdrop for reading a book as she slowly walks. She is a lovely young woman with four sisters.

Their mother (Brenda Blethyn) is feverishly doing everything she can to make sure the girls are all married to a proper gentleman, preferably one with money. Mr. Bennett (Donald Sutherland) patiently tries to keep out of his nervous wife's way as she seeks a match for the oldest, Jane (Rosamund Pike), who is very reserved. Word is out that Mr. Bingley (Simon Woods), a rich young bachelor, has moved into a nearby manor. At a ball, this newcomer is very taken with Jane; his best friend, Mr. Darcy (Matthew MacFadyen), does not seem very interested in the local women. His pride and arrogance rub Elizabeth the wrong way. But no matter, since in Mrs. Bennett's eyes things have gone very swimmingly for Jane.

The family's welfare takes a turn for the worse when their cousin, Mr. Collins (Tom Hollander), arrives. He is a tedious clergyman whose patron, Lady Catherine de Bourgh (Judi Dench), has provided that he will take over their humble estate once Mr. Bennett dies. He is looking for a wife to take to his parsonage and after learning that Jane is not available, he sets his sights upon Elizabeth. However, this independent and romantic young woman wants nothing to do with Mr. Collins and in a most forceful way turns down his proposal of marriage. He weds a friend of hers who at 27 is convinced that she has no other options. Elizabeth does perk up when she meets the dashing Mr. Wickham (Rupert Friend), a soldier who shares some distressing news about the poor treatment he received in the past from Mr. Darcy.

Director Joe Wright has fashioned a totally captivating screen version of Austen's comedy of manners. The screenplay by Deborah Moggach does a beautiful job conveying the romantic entanglements, the misjudgments, and the mishaps that ensue as the very rich mix with those they deem to be their inferiors. Wright has created two festive dance sequences that are filled with telling nuances about all the characters.

But the entire production is carried by the superb performance by Keira Knightley as the acerbic, headstrong, romantic, and judgmental Elizabeth. We sense her love of solitude during her long walks, and her feisty spirit is on display when she stands on a cliff with her skirts blowing in the wind. As Mr. Darcy finds out on many occasions, she is as proud and stubborn as he is; no wonder their clashing eventually takes a turn to another direction. They are meant for each other as soul mates but this is not possible until each becomes a spiritual teacher for the other. The most important lesson involves letting go of the need to control and tasting the blessings of forgiveness.

In one of the best scenes, Elizabeth holds her own against the imperious Lady Catherine who tries to shame and humiliate her. And be sure to enjoy the scene where Elizabeth shares the happiest moment of her life with her loving father who has always found her to be his favorite daughter. Pride and Prejudice breathes new life into Austen's characters and tugs at our heartstrings with its grand finale.

Special features include a Feature Commentary with Director Joe Wright, a Bennet Family Portrait, Jane Austen: Ahead of Her Time, Behind-the-Scenes at the Ball. 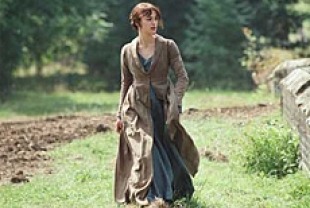 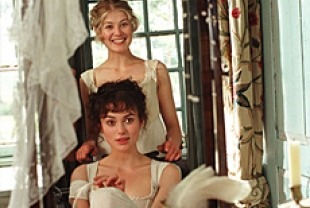 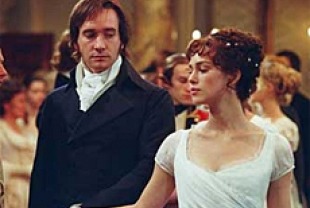 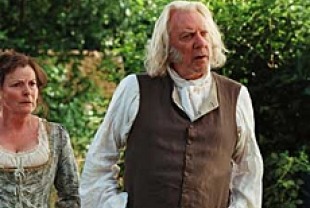