Directed by James Mangold
The story of Johnny and June Cash paying special attention to the important role that our primal emotions play in life, love, and creativity.

When it comes to country music, people can agree on one thing: it's all about emotions. You can sing the songs loud or soft, fast or slow, but what people connect with are all those primal emotions of love, loss, yearning, jealousy, regret, and loneliness conveyed through the lyrics and the chords. The legendary singer and songwriter Johnny Cash once said, "You've got a song you're singing from your gut, you want that audience to feel it in their gut. And you've got to make them think that you're one of them sitting out there with them too."

Director James Mangold (Heavy, Girl Interrupted) has made a rousing movie about Cash and the woman destined to be his wife and soul mate, June Carter. Here is a biopicture that really rocks and registers on the emotions, much more successfully than last year's Ray. Fans of Johnny Cash will rejoice in the details from his life gleaned by screenwriters Gill Dennis and James Mangold from Man in Black and Cash: the Autobiography.

In Arkansas in 1944, Johnny is very close to his older brother who wants to become a preacher. They live with their drunken and abusive father, a sharecropper who works them hard picking cotton. While Johnny is out fishing, his brother dies in a circular-saw accident. His father blames Johnny for not being there, and tells him he wishes Johnny had been the one who died.

Johnny (Joaquin Phoenix) leaves home, joins the Air Force, and spends some time overseas in Germany where he purchases his first guitar and sees a film about Folsom Prison that will have an indelible impact on his life. He returns home to Memphis and marries Vivian (Ginnifer Goodwin), who has big dreams of a prosperous and happy family life in the suburbs with their children. But Johnny can't wait to ditch his life as a door-to door salesman. He's already composing songs and has gotten together a band with two friends. They audition for Sam Phillips (Dallas Roberts) of Sun Records who is not impressed with their gospel tunes. After he challenges Johnny to make him believe what he is saying in his lyrics, Cash delivers a heartfelt song he wrote about being down and out. Phillips signs the band as Johnny Cash and the Tennessee Two. Their first hit is "Cry, Cry, Cry."

The course of this singer/songwriter's life is altered when he meets June Carter (Reese Witherspoon) behind stage at a concert. The daughter of the legendary Mother Maybelle Carter, she has grown up as a member of country music royalty. Not equipped with the vocal talent of her sisters, she has become a stage comedian known for her spunk and ability to reach the hearts of an audience with her charm and wit. Johnny is immediately attracted to her, but there's a snag: he's married, and soon she is too.

On their first dinner together, June resonates with this shy and intense man whose vulnerability is mixed with a self-destructive streak. In their first duet on stage, the sparks fly as they tune into each other's energy. June becomes a friend, one Johnny can turn to in times of exhaustion and need. But he is also depending upon a false ally: amphetamines. He quickly develops a dependence upon the drugs, using them to help him get through the pressures of touring, creating new songs and albums, and his guilt over not spending enough time with his wife and daughters.

There's a running joke in the film that when Johnny Cash dresses in black, he looks like he's going to a funeral. His retort is, "Maybe I am." Cash never quite gets over the early death of his brother, and feels imprisoned by the terrible judgment of his father that he is "nothing." But this is a love story, and it's clear that the relationship with June Carter is what sustains him. After ten years of friendship with June, Johnny proposes to her on stage in front of an audience in Canada. The moment is filled with honest emotion.

Cash is also known for his Christian faith, which is only alluded to in a brief scene when he and June go to church, and in her prediction after she helps him kick his drug habit: "God has given you a second chance to make things right." It all comes together during his performance at California's Folsom Prison, which is the high point of the film. When he tells his handlers that he wants to do a concert at the prison, they tell him not to do it: "Your fans are church folk. They don't want to hear you singing to a bunch of prisoners." "Then they aren't Christians," Cash replies, revealing that the man in black knew what the man from Nazareth was about. The scene of him stepping on the stage in front of an audience of prisoners crazy with excitement is something wonderful to behold.

Rabbi Jory Lang has wisely observed: "We're conditioned to think that our lives revolve around great moments. But great moments often catch us unaware — beautifully wrapped in what others may consider a small one. People may not remember exactly what you did, or what you said, but they will always remember how you made them feel." Director James Mangold has exquisitely crafted into this biopicture of Johnny Cash many such moments of emotional vibrancy, and it is to his credit that these moments add up to a delicious appreciation for the love that blooms between Johnny and June. She helps him see his true worth, and he draws out her songwriting talent which manifests in the classic rocker "Ring of Fire." We'll remember how they made us feel. 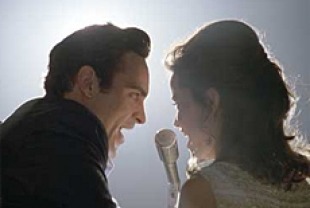 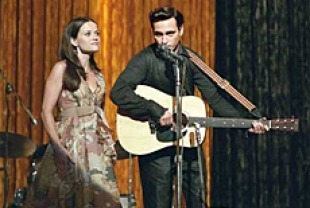 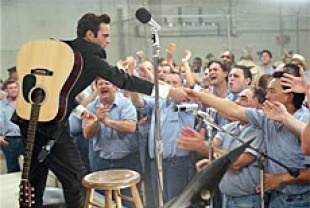