The Boys of Baraka

Directed by Heidi Ewing, Rachel Grady
A passionate tale that charts an experimental educational program that takes African-American boys from the ghetto streets of Baltimore to the wilderness of Kenya.

In the opening scenes of this gritty and gutsy documentary by Heidi Ewing and Rachel Grady, a group of African-American youths in the Baltimore slums play a game of cops and robbers while police are arresting someone not far from them. In this rough urban area where drugs and violence are rampant, it is hard for young boys to keep their minds on school. A young woman gathers a group of youths in an auditorium and tells them they face three options: an orange jumpsuit and "nice bracelets," a black suit and a brown box, or a cap and high school diploma. She also lets them know that seventy-six percent of African American boys do not graduate from high school. She represents Baraka, an experimental boarding school in rural Kenya that has been set up for the specific purpose of helping young boys who are having trouble or causing trouble in Baltimore's middle schools.

The filmmakers follow four boys selected to participate in this program. Richard and his younger brother Romesh live with their mother (their father is in prison). She is proud that her sons were chosen for the program. Richard is fed up with the drug users in the neighborhood and wants to make something out of his life.

Devon has musical talent and wants to become a preacher. His mother is a drug user who has been in and out of jail. He has plans for the future and a religious community supporting him.

Montrey is a kid who has always been in trouble. He's been suspended many times from school. Although not thrilled with the idea of going to Africa, he is willing to give it a chance.

These twelve and thirteen year olds seem to revel in the freedom to explore the natural world in Kenya, where elephants, zebras and giraffes are within view. The principal and teachers in the school are convinced that the wilderness experience will have a positive effect on the boys.

After a short time, Romesh wants to go home. But he is convinced to stay. Montry has more trouble controlling his temper and has to chill out. Everyone is surprised to learn that he has a gift for mathematics.

After a year at Baraka, the boys return to Baltimore for a two month break before returning for another year. But they are shocked by the news that the school in Kenya has been closed down by authorities for security reasons.

This inspiring documentary shows that people can change and that far too many youths have been written off as incorrigible or beyond hope or help. We need more experimental programs like Baraka and individuals who care about ghetto youth and their aspirations.

Special DVD features include a commentary by directors Rachel Grady and Heidi Ewing, "A Conversation with Bill Cosby" featurette, deleted scenes, and "The Boys: An Update." 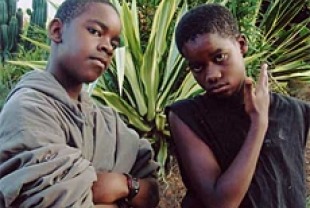