Memoirs of a Geisha

Directed by Rob Marshall
A beautiful window into Japanese culture that also shows how a small act of kindness can send out many ripples, and transform another's life.

We directly influence our destiny by the choices that we make. But our course also may be drastically altered by outside forces. A life can be moved in a new direction by a person, a word, a thought, or a deed. Some of these occurrences are very profound and sobering but most of them are trivial and ephemeral. Like a pebble thrown into a pond, a small thing sends out many ripples.

The most magical moment in Memoirs of a Geisha, a film overflowing with such moments, comes when a little girl meets a man whose kindness proves to be life transforming. Kindness is an act of kinship, the very opposite of disrespecting a person. For this little girl, this act comes at a time when she is feeling lonely, hopeless, and helpless. The man's unexpected care becomes a gift of hope and new direction.

Kindness is an undervalued virtue in American society, but it was not so in pre-war Japan where this story is set. It is based on the 1997 literary sensation and runaway bestselling novel written by Arthur Golden. The book has been brought to the screen with all its beauty, romance, and melancholy in tact thanks to the many skills of director Rob Marshall (Chicago).

Nine-year-old Chiyo (Suzuka Ohgo) lives in a Japanese fishing village with her family in 1929. Her mother is terminally ill, and so her father sends Chiyo and her sister to the Gion district of Kyoto to a famous geisha house run by Mother (Kaori Momoi). Her less attractive sister is sent away to a house of prostitution, and Chiyo is given menial tasks until the time when she can be trained to be a geisha. Another girl, Pumpkin, shows her the ropes.

Hatsumomo (Gong Li), the number one geisha of the house, takes an instant disliking to Chiyo. Every opportunity she gets, she tries to humiliate or embarrass her. The little girl's debts pile up, and it seems as though she will be forced to be a maid for the rest of her life. Then one day on the streets of Kyoto, a kind-hearted businessman called the Chairman (Ken Watanabe), talks to her, buys her a fruit ice, dries her tears, and gives her his handkerchief. Chiyo determines that she wants to live in this man's world, and this means she needs to become a geisha.

In the mid-1930s, Chiyo (Ziyi Zhang) is 15 when Mameha (Michelle Yeoh), an elegant geisha and rival to Hatsumomo, sets up a financial arrangement with Mother to take the girl on as her protégé. In the most interesting section of the story, Chiyo learns the meticulous arts of this profession that involves wearing a kimono; putting on complicated make-up; becoming proficient as a dancer and singer; mastering the ability to stop a man in his tracks with a glance or delicately revealing her inner wrist while pouring sake. The geisha sells her skills of personal decorum and emotional restraint and not her body; she is neither a prostitute nor a wife. She is a "moving work of art," a master of entertainment and a purveyor of many gentle graces. And in this "floating" and secret world, the geishas are taught, love is an illusion not available to them.

Meanwhile Hatsumomo, always the competitor, takes Pumpkin (Youki Kudoh) under her wings and makes her promise never to speak to her friend again. After two years of training, Chiyo, whose name is changed to Sayuri, is ready to make her debut as a dancer and auction her virginity to the highest bidder. Mameha also decides that she should take on a danna or personal patron. Sayuri desperately wants this man to be the Chairman but instead she is told to pay special attention to his business associate Nobu (Koji Yakusho).

The final third of the movie charts her exile from Kyoto during the dangers and dislocations brought on by World War II and the American occupation. Sayuri is sent to the countryside and bears up well under the tension of the times. Still, she longs to be return to the geisha world and be united with the Chairman.

In The Pillow Book of Sei Shonagon, a collection of anecdotes about Japanese court life circa 1000, we find this passage:

"It was a clear, moonlit night. . . . Her Majesty . . . sat by the edge of the veranda while Ukon no Nashi played the flute for her. The other ladies in attendance sat together, talking and laughing; but I stayed by myself, leaning against one of the pillars between the main hall and the veranda.

" 'Why so silent?' said Her Majesty. 'Say something. It is so sad when you do not speak.'

This excerpt beautifully conveys the delicacy and the manners of Zen culture where restraint and indirection are distinguishing features. Memoirs of a Geisha

Memoirs of a Geisha does not yield all its secrets on first viewing; there are many layers of meaning and mystery to be savored again and again. Best of all, here is a movie that unabashedly celebrates small acts of kindness as the most precious thing we can bestow on one another.

Some of the special DVD features include: Commentary by director Rob Marshall and co-producer John DeLuca; Production Commentary by Costume Design Colleen Atwood, Production Design John Myhre, and Editor Pietro Scalia; "Sayuri's Other Journey: From the Novel to the Screen" featurette - Novelist Arthur Golden and the filmmakers discuss the 8-year journey of turning the best-selling book into an award winning film; "The Road to Japan" featurette - the filmmakers travel to Japan to experience the places in Kyoto that are featured in the book and discuss the challenges of shooting in some of Japan's most sacred locations; "Geisha Bootcamp" featurette - A behind the scenes look at how the actresses learned the art of becoming geisha; "Building the Hanamachi" featurette - Recreating the entire village of old Kyoto in a pasture in Southern California; "The Look of a Geisha" featurette - The most famous Geisha were considered to be the supermodels of their time, learn the ancient secrets and modern twists to creating their hair, makeup and wardrobe for the film; "The Music of Memoirs" featurette - John Williams, Yo-Yo Ma and Itzhak Perlman discuss the process of composing the Golden Globe® winning score; "A Geisha's Dance" featurette - the process of staging these dances, from research into authentic geisha dance (illustrated with the archival footage that served as inspiration) through conception, casting sessions, rehearsals, on-the-set rehearsals, filming, and the final version in the movie; "The World of the Geisha" featurette - A look at the history of this secret world, from its ancient origins up to the geisha of today. 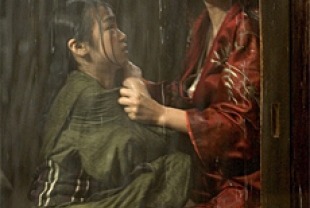 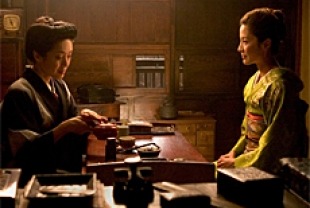 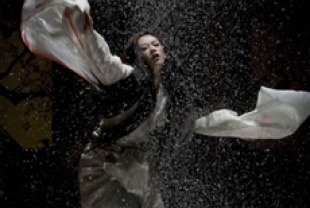 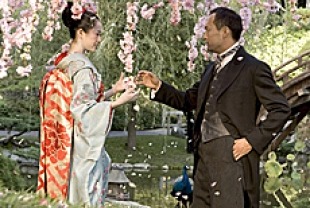