Directed by Philip Groning
An exquisite meditative journey inside a Carthusian monastery where silence is practiced as a way of honoring the mystery and the majesty of God.

Welcome to an extraordinary film about the Carthusian monks of Grand Chartreuse in the mountains near Grenoble, France. This order was founded by Saint Bruno of Cologne (1030 - 1181) in 1084 and is considered to be the Catholic Church's most ascetic order. The monastery itself was built in 1688 and the monks who reside there have dedicated their lives to God, to silence, and to solitude. Visitors are not allowed. But thanks to the patience, creativity, and diligence of Philip Groning, we now have access to what goes on in this holy place where prayers, study, and physical work form the repetitive foundations of daily life.

Monasticism has existed for centuries, yet it is only recently that many people around the world have visited these places for personal retreats. Groning first approached the monks about making a film inside the Grand Chartreuse in 1984 but had to wait 16 years until permission was given to do so. He lived in the monastery for six months, sleeping in a small cell and doing certain chores in addition to shooting the film, which he did without the assistance of a crew or any artificial light. Goring has subtitled this journey into one spiritual realm a meditation on life, a contemplation of time, silence, repetition, and rhythm.

Time for the monks of Grand Chartreuse is measured in the prayers that structure their days. The opening scene shows a monk kneeling in prayer in his cell. This is done seven times a day. The bells are rung to call everyone to attention. In one sequence, a monk prays, rings the bells, and then prays again. There is no end to this divine connection.

The monks share the chores necessary to keep the monastery running smoothly. An elderly monk shovels snow from the gardens outside; another is shown in the tailor shop creating robes for a new monk. Two men saw wood for the fireplaces. A monk chops vegetables in the kitchen while another delivers plates of food to the monks through hatches in the cell doors.

The men gather in community for a 45-minute morning mass and a 30-minute evening mass and sing Gregorian chants. The noon meal on Sundays is another communal gathering. Two scenes capture just what caring in community really means. A young monk is shown applying lotion to the sagging body of an elderly monk. In another, the monks tenderly give each other haircuts. And during a service for new monks they exchange an embrace of peace.

The rule of silence is that one should speak as little as possible. One must never speak in the chapel, the anteroom or the hallways. But there are prescribed times when communication with others is permitted, including the four-hour Sunday walks. One of the most surprising touches is a scene where the monks gather on a snow-capped mountain and take turns sliding down the hill on their boots; a few lose their balance, fall over, and roll down the snowy slope laughing.

Sacred reading is an important ingredient in the monk's life and is done regularly. The filmmaker puts certain quotations on the screen to simulate the repetitive readings from the Psalms and other portions of Scripture and mystical writings. One of them, "You have seduced me, I was seduced," captures the mood of the place and its focus on the many ways in which God enchants us. Another, "Anyone who does not give up all he has can't be my disciple," conveys the dedication and sacrifice of the monks.

This extraordinary film ends with a spiritual quotation that conveys the heart of the monastic life and the bounties of silence: "I am the ONE who is." This film, which both depicts and creates a contemplative experience, is bound to become a classic among spiritual people of every religion and seekers of all stripes. Make every effort to see it in a theater. 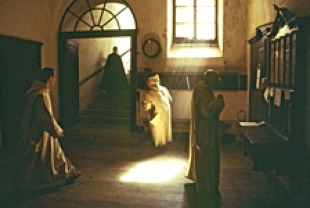