Directed by Mohammad Rasoulof
A clever and thought-provoking fable about Iran.

A rusty old oil tanker is slowly sinking in the Persian Gulf. It is home to hundreds of poor, abandoned, and uneducated Iranians. Every man, woman, child, and animal aboard this island home is under the benevolent command of Captain Nemat (Ali Nasirian). He wanders through the ship taking care of business — selling medicine and cell phone calls, checking up on families with problems, and making sure that everyone is okay. The ship's owner and the authorities have told him that he must evacuate the premises but Captain Nemat has refused. Meanwhile, there are funerals, weddings, and births in the community. Life goes on. The entrepreneurial boss sells barrels of oil from the ship's hold and makes money from scraps of iron off the tanker itself.

Three souls remain outside the purview of Captain Nemat. One is a subversive teacher who tries to educate the kids with inadequate supplies; he sneaks into his lessons that the ship is sinking. Another is Ahmad (Hossein Farzi-Zadeh) who is in love with a girl whose father has arranged a marriage for her; he rebels against the Captain when he sides with her father. Then there is a kindly little boy who has his own mission of mercy; he catches the small fish that have come aboard through holes in the tanker and liberates them into the sea.

Writer and director Mohammad Rasoulof has made a sturdy, thought-provoking, and clever fable about Iran and the universal struggle to survive.

Special features on this DVD include a stills gallery and trailer 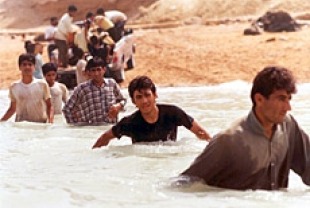