Directed by Victor Salva
A rousing drama about an egocentric and restless young gymnast's spiritual transformation.

Dan Millman (Scott Mechlowicz) is a driven gymnast who dreams of winning gold in the Olympics. He has been training for years and now attends the University of California. Although Dan is a skilled member of the gymnastics team, a straight A student, and a popular fellow with the girls, he has trouble sleeping at night and is bothered by nightmares. One evening, he gets up at 3 a.m. and goes for a ride on his motorcycle. He ends up at a full-service gas station. As he is leaving, Dan can't be sure but he thinks that the mechanic there (Nick Nolte) has made a 12-foot vertical jump from the ground to the roof.

Intrigued and thinking that perhaps this man can teach him something he can use in the gym, Dan returns the next night. After listening to the man spout spiritual aphorisms, he decides to call him Socrates. Dan asks what he is doing working in a gas station and is surprised by the answer: "This is a service station; there is no higher purpose than service." Dan can't really connect with that. His mind is filled with a constant barrage of thoughts and emotions that keep him in a state of agitation. Socrates sees that this college student has kept his body in fine shape but has not done much inner work. He wants Dan "to take out the trash," all the stuff that passes through his head that he doesn't need.

Back at the gym, the team is practicing for an Olympics qualifying meet. One of the gymnasts hurts his arm, and the coach (Tim Dekay) needs someone to replace him on the pommel horse. Dan is the reigning "Lord of the Rings," but he decides to quiet his mind and be totally present during his routine on the pommel horse. He amazes everyone with a razzle-dazzle performance. When he boasts to Socrates that "I was totally awesome," his spiritual teacher refuses to join his ego parade.

Soon Socrates' prescribed regimen of abstinence from drinking and women leaves Dan feeling deprived, and he returns to his old lifestyle. That's when a major tragedy turns his life upside down, and he wonders whether he'll ever be able to regain what he has lost. Another helper along the way is Joy (Amy Smart), a friend of Socrates who helps Dan stay on the spiritual path.

Victor Salva (Powder) directs this transformational spiritual drama based on Dan Millman's autobiographical novel The Way of the Peaceful Warrior. The screenplay by Kevin Berhardt could have been edited down, especially some of the long gymnastics sequences. In addition, the soundtrack is very strident, providing far too many exclamation points for the drama's emotional highpoints. Nonetheless, we can recommend this inspiring drama to those spiritual seekers who liked The Karate Kid series of movies.

These movies do a fine job putting the spotlight on the relationship between a student and a wise teacher. Here Dan is forced to do battle with his restless mind and imperious ego. He knows how to practice in the gym but has not learned how to practice in everyday life. While out one evening, Dan and Socrates are robbed by three thieves who walk away with more loot than they expected, as the spiritual teacher models the practice of generosity. It is also great to see that Socrates derives such happiness from his job as a mechanic and being of service to others.

After many missteps and difficult challenges, Dan finally realizes that he has to polish his heart to be a better friend and an athlete who is happy just to participate in his sport. A final hike with Socrates serves no other purpose than to help Dan realize that the journey is what counts, not the destination. By the end, this centered young man is ready to share his wisdom with others. You won't get many chances to see American spiritual movies like Peaceful Warrior, so we recommend this one despite its flaws.

Special DVD features include deleted and extended scenes; featurettes: "The Journey," "Developing Your Warrior," and "Book to Screen"; and the music video "I'm There Too Much." 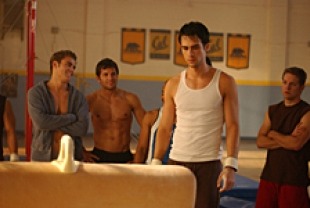