Directed by Alejandro Agresti
A time-travel love story that salutes the spiritual practice of waiting.

Movies with flashbacks are well suited to stories about time travel. This one is based on Il Mare, a 2000 South Korean film about two lovers and their communication across time. It has been adapted for English speaking audiences by David Auburn, the author of Proof and directed by Alejandro Agresti who was at the helm of Valentin, a delightful coming-of-age tale about a boy's dreams of becoming an astronaut. The Lake House is a slight love story that manages to hold our interest thanks to the vulnerabilities of the two main characters, the use of letters to communicate across time, and the yearning that draws them together despite the odds against such a miracle.

On a winter morning in 2006, Kate Forster (Sandra Bullock) leaves a lake house built on stilts over the water. She is sad to give up this place that has brought her a sense of inner peace she has never known before, but she has taken a new job at a hospital in Chicago and has to move. On her way out, she leaves a note in the mailbox for the next tenant, asking him to forward her mail to her new address.

Alex Wyler (Keanu Reeves) is a gifted architect who is at a transition point in his life and wants some grounding. It turns out that this lake house was built years ago by his father, Simon (Christopher Plummer), a world famous architect. Alex has purposely distanced himself from him and is now constructing condos, something his younger brother Henry (Ebon Moss-Bachrach) cannot fathom. Fixing up the lake house gives him some satisfaction although the place carries many sad memories, especially of his mother's departure after being pushed out of her husband's life once he became famous. When Alex looks at the date on Kate's note, it says 2006. He is living in 2004. Intrigued, the two begin to correspond by letters across the years.

Kate is also in transition in more ways than her job. She is tired of waiting for the man of her dreams. Her first love affair ended abruptly when she was only a teenager, and her last boyfriend, Morgan (Dylan Walsh), was more a friend than anything else. Kate's mother (Willeke van Amelrooy) senses her daughter's isolation and loneliness but can do nothing to assuage it. Anna (Shohreh Aghdashloo), a physician and colleague, tries to provide moral support. She recognizes that Kate is working too hard and doesn't have any way to escape the pressures of her work. A sign of her plight is a scene where she is playing chess with her dog.

It is their loneliness and mutual yearning that draws Kate and Alex together across the span of time. But it is waiting that holds the key to everything that matters in this love story. Kate's favorite novel is Persuasion by Jane Austen, and it celebrates this virtue. Carlo Carretto, one of the great spiritual writers of our time, once spent a number of years living by himself as a hermit, praying in the Sahara desert. When someone asked him what he thought he heard God saying to him in all that silence and after all that prayer, Carretto replied: "God is telling us: learn to wait — wait — wait for your God, wait for love, be patient with everything. Everything that is worthwhile must be waited for!"

Waiting patiently for love is very difficult in this day and age when we squirm when we have to wait a few seconds for an elevator, get frustrated when we are put on hold on the telephone, and look for instant messages on our computers. The Lake House operates at a different pace. The characters linger over their letters and gaze thoughtfully into the distance as they try to absorb their situation. In one scene Kate sits quietly in a restaurant for hours. The key to their love is the ability to keep their hope alive while they wait. And so it often is for the rest of us. 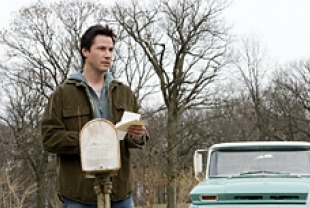 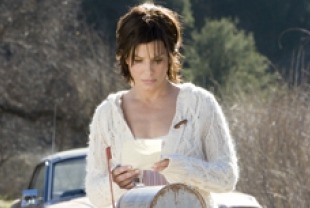 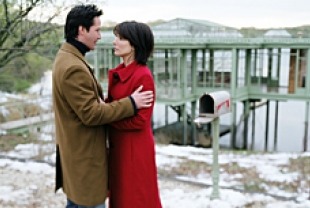