Directed by Chris Hegedus, Nick Doob
A documentary about the comedian and satirist who sees himself as a leftward leaning crusader for Truth and Justice in an era of Lying Liars.

Documentary filmmakers Chris Hegedus and Nick Doob present a profile of the Left's Don Quixote, Al Franken who sees himself as a crusader for Truth and Justice. It covers a time period from the publication of his book Lies and the Lying Liars Who Tell Them through the 2004 election. On a panel discussion at a book convention, the comedian, who made a name for himself on Saturday Night Live, trades barbs and raises the ire of Bill O'Reilly, the host of The O'Reilly Factor, who later calls him "a vile human being."

Franken is pleased when he is chosen to host a three-hour radio show on Air America Radio. We do learn a little about his relationship with his father, his favorite comedians while growing up, his adoration of Senator Paul Wellstone, his reliance upon his wife of 27 years, and his frustration over the growing marginalization of the Left. Franken delivers some funny one-liners at the expense of President Bush and Vice President Cheney but struggles to hold his own in face-to-face encounters with right-wing superstars Ann Coulter and Sean Hannity, who are much more nasty in their slams on him. At a Newsweek party attended by Republicans, he tries to bring some humor to the situation and winds up doing his Henry Kissinger impression for the man himself.

The best moments are the most honest ones: tears in his eyes watching John Kerry's concession speech; a get-together with Walter Mondale who advises him that if he runs for U.S. Senator in Minnesota, he better make sure that he has no skeletons in his closet. Franken is a lovable underdog who may have the right stuff to carry him to elected office. Our favorite line: "The future belongs to those who are passionate and work hard." Trouble is: the Right Wing have taken those words and made them their own. Franken and those who support him will have to have a lot of passion and hard work to make it to Washington. 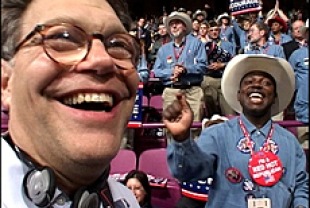 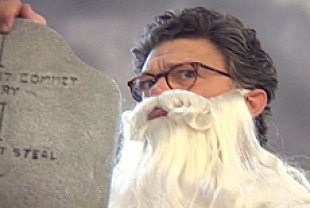 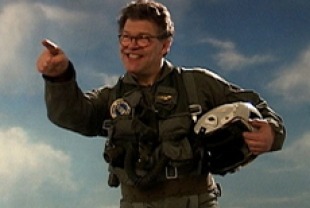