Directed by Marc Francis, Nick Francis
A hard-hitting documentary focusing on tireless efforts of a manager of a coffee grower's cooperative in Ethiopia to get members more money for their labors.

• Coffee is the largest trading commodity in the world after oil, generating annual sales of $80 billion dollars per year.

• The price of coffee is established on the major futures exchanges in New York (Arabica coffee) and London (Robusta coffee).

• Coffee is the most popular drink worldwide. Globally, about 2 billion cups of coffee are drunk every day.

America is the largest coffee consuming nation in the world. It is estimated that more than 100 million Americans drink a total of 400 million cups of coffee every day. But how many have any idea of what goes into the growing, picking, harvesting, and roasting of that coffee? Documentary filmmakers Nick and Marc Francis take us to Ethiopia, the birthplace of this magical brew. There 15 million people depend on coffee for their survival. It accounts for 67 percent of the country's foreign export income. Yet on average, a coffee farmer receives less than ten U.S. cents for a kilo of coffee. In the last few years, the price of coffee has reached a 30-year low.

Tadesse Meskela, manager of the Oromia Coffee Farmers Co-operative Union in Ethiopia, is trying to help these poor farmers get a better price for their labor. He has built an organization of 101 cooperatives representing 70,000 coffee growers. Meskela believes that bypassing the international commodities exchange is one way to get Ethiopian farmers a better price for their exquisite coffee beans.

Black Gold shows in vivid scenes the hardships experienced by people involved in coffee production. Maskela visits a processing plant where women work eight hours a day and earn 50 cents picking out bad beans from the thousands of good ones. We meet a poor farmer who returns home after a day in the fields to a shack filled with 15 people and one infant. Things are so bad for his neighbors that many of them are digging up their coffee trees and growing chat, a leafy narcotic. The children in Ethiopia are being shortchanged since there is no money to pay teachers or put blackboards in the schools. An epidemic of hunger among the young is growing.

Meanwhile at the World Trade Organization talks, representatives from the Third World are not given a decent hearing. They want a fairer system of trade, one that does not give all the breaks to the rich countries. A one percent increase in the African continent's share of world trade would in itself generate $70 billion per year — five times what the continent receives in aid.

After seeing Black Gold, consumers will want to take up the cause of Fair Trade and support Third World coffee-growers. Already you can limit your coffee purchases to Fair Trade brands. That's a first step. 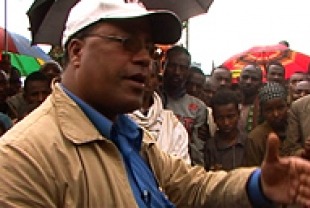 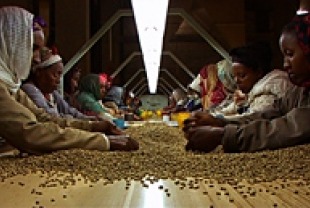