Directed by John Carney
A charming film about two down-and-out individuals who collaborate on a musical project that deeply enriches them in surprising ways.

The lead character (Glen Hansard) is a street musician in Dublin who plays his own songs at night and the ones people like to hear during the day. To earn money, he works in his father's vacuum cleaner repair shop. The old man believes that one day his son will get a recording contract.

The romantic young man has used the breakup with his girlfriend as material for his latest songs. When a pretty Czech immigrant (Marketa Irglova) hears him on the street, she is impressed and strikes up a conversation. Learning that he repairs vacuum cleaners, she brings her broken one along the next time they meet. She takes him to a music store, and she plays one of his songs on the piano, singing along as well. He is totally floored by her love of his songs and her talent. She invites him to her place where she lives with her young daughter and mother. Her husband is in Czechoslovakia and may be coming soon to Dublin.

Irish writer and director John Carney calls his film an "art house musical," and it really succeeds in drawing us into the orb of these two unassuming individuals who share a magical moment of making beautiful music together in a recording studio with several other musicians. The folk-rock music really works wonders, and the performances by the two leads are filled with charm and vulnerability as they struggle with moving from friendship to a love relationship. He is the romantic one and his yearning for her is palpable. The energy and ease of Once brings to mind Alan Parker's wonderful 1991 film The Commitments, which was also set in Dublin and focuses on people whose lives were enriched by their passion for music. 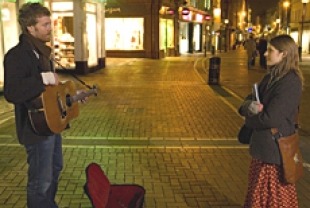 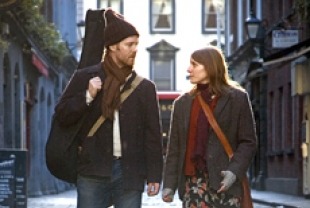