Directed by Michael Caton-Jones
A compelling drama about the 1994 genocide in Rwanda and the moral heroism of a compassionate priest.

In April of 1994, the plane carrying the President of Rwanda is shot down and he is killed. Hutu extremists in the government seize the opportunity to begin a campaign of genocide against the minority tribe in the country, the Tutsis. Hate radio programs call for the elimination of these "cockroaches," and armed Hutu militias begun rounding up Tutsis and killing them — men, women, and children.

The Ecole Technique Officielle (ETO), a secondary school in Kigali, becomes a refugee camp as many Rwandans flee for their lives; they assume they will be safe since it is run by Catholic priests and UN Peacekeepers are stationed there. The director is Father Christopher (John Hurt), who believes in the efficacy of the Catholic mass as a carrier of grace in hard times. But even after spending 30 years in Africa, he is unprepared for the carnage taking place in Rwanda. When he goes out to see if the nuns at a convent are safe, he finds their raped corpses. As the slaughter continues, Father Christopher becomes more and more angry at the UN troops who have weapons but do not have a mandate to use them against the armed Hutu militias outside the school's gates. Their food and water supplies must be shared with the UN troops, the whites from the city, the school children and their parents, and 2500 Tutsis.

Michael Caton-Jones directs this fact-based drama which depicts some of the same events as Hotel Rwanda but from a religious perspective. The screenplay by David Wolstencroft, David Belton, and Richard Alwyn covers the moral choices made by several characters in this crisis situation. Joe Connor (Hugh Dancy) is an idealistic teacher who starts out wanting to make a difference in the lives of the Africans he serves but finds himself worn down and numbed by the violence he witnesses in the city. Captain Delon (Dominique Horwitz), head of the UN Peacekeepers, is sensitive to the criticism of his stance but steadfastly refuses to order his troops to take any action against the Hutu militias.

Television reporter Rachel (Nicola Walker) is a seasoned veteran of violence around the world; in a searingly honest conversation with Joe, she admits why she is less affected by the brutality in Rwanda than by what she saw in Bosnia: "Over here, they're just dead Africans." She has no qualms about leaping aboard a truck when the whites are evacuated from the school because she just does not identify with the Africans and their plight. Neither did the rest of the world judging from the moral cowardice of the United States, Great Britain, other European countries. and the Security Council of the United Nations. This leaves Marie (Clare-Hope Ashitey), a student at the school, in a jeopardy situation as all the whites evacuate the compound except for Father Christopher, who feels solidarity with the abandoned 2,500 Tutsis who now face certain death. His love, compassion, and courage in this terrible situation are commendable and inspiring: he comes across as a true hero willing to sacrifice his life for those who are viewed as disposable by the rest of the world.

Special DVD features include the making of Beyond the Gates featurette and ways to get involved: The International Rescue Committee's Efforts with War-Torn Communities and Uprooted People. 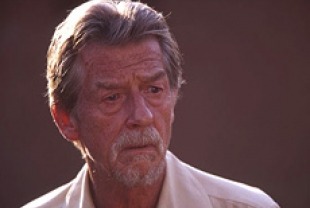 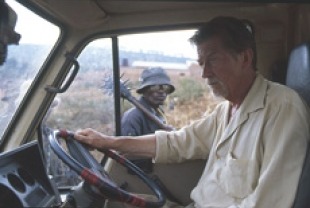 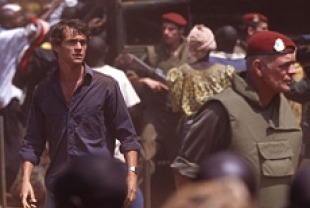 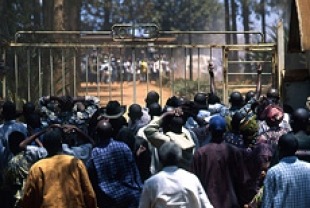 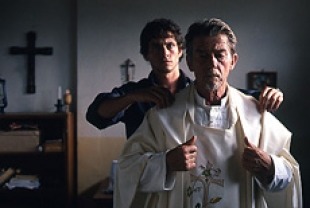