Pascale (Isabelle Huppert) has been divorced from Luc (Patrick Descamps) for many years. He has remarried a younger woman and had a child. He stops by occasionally to dole out money to his twin sons with Pascale, Thierry and Francois (Jeremie and Yannick Renier). Pascale is very upset whenever she sees him and orders him to meet the boys elsewhere. She still serves as the caretaker for her grown sons who spend most of their time lounging around the Belgium farm house watching television or playing ping-pong. Thierry has plans to pursue his studies while Francois busies himself doing odd jobs around the place.

Thierry is a very angry young man and has been severely upset by the break-up of the family. When Pascale mentions she's thinking of selling the house and starting a countryside B & B, he explodes in a rage. He is convinced that it is selfish for his mother to think of herself and put her own happiness above theirs. Francois sides with his mother but is too shy to say so. Suddenly every meal becomes a time of tension, and the anger between Thierry and Pascale increases with each day.

Meanwhile, Pascale has started dating Jan (Kris Cuppens), a Flemish neighbor who encourages her to step into a new life apart from her sons. One evening she invites him to dinner, and it turns into a war between her lover and her angry son. Later, Thierry brings his girlfriend home to meet Francois and even more trouble ensues.

Joachim Lafosse has fashioned a tightly structured family drama that accurately portrays the domestic wars that can drive family members apart. Isabelle Huppert is convincing as the tentative Psacale who wants a small share of happiness but doesn't have the will power to bring her dream to fruition. Jeremie Renier gives an explosive performance as the selfish and antagonistic Thierry, a young man who insists on having things his way. When the universe does not respond to his agenda, he goes ballistic. Along with his anger is a complete inability to empathize with the mother who has nurtured and taken care of him for all of his life. These two energies take him to a place that he does not want to go, and it has a dire effect on the other members of his family.

Special features on the DVD include theatrical trailer; enhanced for 16x9 TVs; scene selections; liner notes: production notes and interview with the director. 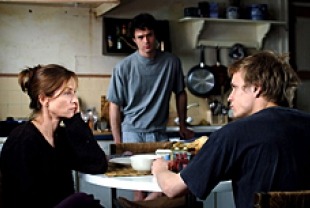