Directed by Davis Guggenheim
A fifteen-year old girl becomes a fierce little soccer warrior, thanks to some encouraging words from her brother and father.

New Jersey, 1978. Fifteen-year old Gracie Bowen (Carly Schroeder) watches on the sidelines as her soccer-obsessed father Bryan (Dermot Mulroney) coaches her oldest brother Johnny (Jesse Lee Soffer) and two younger brothers. They practice in the backyard. But all this energy and activity ceases when Johnny, the star of the high school varsity team, is killed in a car accident. The one who grieves for him most is Gracie, who cherished him as her protector and close friend. In a moment when she was feeling down on herself, he came through with the most encouraging words anyone could utter: "You can do anything." People of all ages need to know they are appreciated for who they are and what they are doing.

This movie, directed by Davis Guggenheim (An Inconvenient Truth), is filled with the kind of high and low moments that typically show up in sports movies. But it’s the dynamics of this family's life that make this film stand out from the crowd.

Johnny's life-giving words take root in Gracie's heart and enable her to do wondrous things beyond her wildest imaginings. She decides that she wants to play on the varsity soccer team and begins physical training on her own. Her father and mother, Lindsay (Elizabeth Shue), do not take her seriously until she rebels by purposely flunking a course in school and going to the Jersey shore with a friend (Julia Garro) looking for a sexual encounter with some college boys. Her parents do show up to support Gracie when she petitions the school board to play on the varsity soccer team. Lindsay, a nurse, pleas for the men and women on the committee to give Gracie a chance to fulfill her passion for soccer. Gracie is given permission to try out, and Bryan agrees to train her.

The screenplay by Lisa Marie Petersen and Karen Janszen does a fine job in conveying the family dynamics of grief following Johnny's sudden death. The connection that is forged between Bryan and his daughter is developed slowly through a series of obstacles and set-backs. But when she needs him most, he is there to offer loving words of encouragement, which is often the most any parent can do. The soundtrack contains a lively mix of rock selections from Boston, Blondie, and Bruce Springsteen.

Carly Schroeder puts in a stellar performance as the teenager who becomes a warrior when most of her peers are cheering from the sidelines. The film closes with the following note: "Thanks to Title Nine and brave girls like Gracie, there are over 5 million girls who play soccer in America. Since 1991 the U.S. Women's National team has won Soccer's World Championships four times." 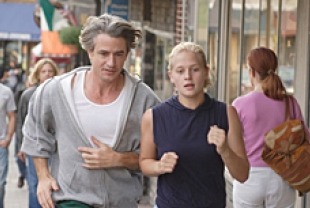 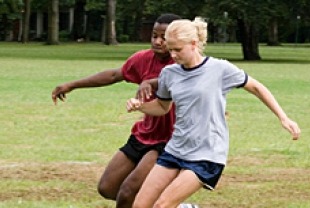