Directed by Walter Salles
The uplifting story of an unlikely friendship between an orphan and cynical woman who learn to help each other.

This emotionally affecting Brazilian drama directed by Walter Salles is one of the best films of 1998. Dora (Fernanda Montenegro) is a cynical and selfish former schoolteacher who earns a living writing letters for the illiterate in Rio de Janeiro's busy railroad station. Viewing most of her clients as "trash," she never even mails their missives.

Nine-year-old Josue (Vinicius de Oliveira) comes to the station with his mother, who has Dora write a letter to his father in a faraway town. Then his mother is struck and killed by a bus. With nowhere to go, Josue (Vinicius de Oliveira) sleeps in the station. Dora reluctantly takes him to her cramped apartment where he finds the letter with his father's address. But the next day, she sells him to some people who claim to be in the adoption business. She buys a new television with the money from the transaction. Her friend Irene is horrified at her callousness. The boy, she warns, is in real danger of being killed for his organ parts. Dora decides to rescue him and return him to his father. The two get on a bus and flee the city.

All the world's religions celebrate compassion as the quivering of the human heart in response to suffering. Central Station depicts the slow opening of Dora's heart as she and Josue travel across Brazil. After she tries to abandon him once, and he loses all the money she gave him, they are picked up by a friendly fundamentalist Christian truck driver. Dora welcomes this respite from her loneliness, but he rushes off once he realizes she is interested in him physically.

The miraculous hatching of Dora's heart occurs when they end up in the middle of a rural religious pilgrimage. Once again, the old woman becomes a letter writer, but now she approaches it differently. Perhaps for the first time in her life, she senses her kinship with other people and their mutual yearning for love and connection. Further experiences with the boy awaken within her a tenderness for life. She is transformed by the end of the journey.

Catholic writer Henri J. M. Nouwen once wrote, "The joy that compassion brings is one of the best kept secrets of humanity." This extraordinary film publishes that secret, and we receive it with tears and glad tidings. 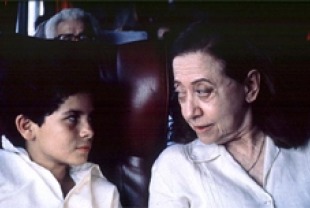