Blame It on Fidel

Directed by Julie Gavras
An extraordinary French drama about the reactions of a conservative nine-year old girl to the radical politics brought into her life by her parents.

There is a part of every child that is conservative, that loves order, security, and certainty. It is much easier to rest in the regular routines of the familiar than to adapt to change. It is comforting to think that everything is secure and will remain that way forever. And it is good for the ego to think that some things can be known for sure. Children feel proud and happy when their perception of the way the world operates is confirmed by others. All of these aspects of childhood are probed in Blame It on Fidel, a wonderfully acted French film that offers a compelling portrait of change in the life of a nine-year-old girl in 1970.

Anna (Nina Kervel) sits at a wedding party and is very proud that she has mastered the fine art of cutting a piece of fruit into pieces while many of the other children at the gathering are unable to handle the task with any grace or efficiency. She excels at her Catholic school and loves catechism class. Anna lives with her father Fernando (Stefano Accorsi), a lawyer from a wealthy Spanish family, and her mother Marie (Julie Depardieu), who writes for a popular French women's magazine. Her younger brother Francois (Benjamin Feuillet) sometimes bothers her with his excess energy; at other times she likes to take care of him.

The smooth flow and predictability of Anna's home life is upset when her aunt arrives with her young daughter from Spain. Her husband has died, and her militant politics have made her a target in Franco's reign. Filomena (Marie-Noelle Bordeaux), their housekeeper who fled Cuba when Castro took over, is appalled that the family is harboring a Communist. Anna hears these complaints and realizes that things are changing in her home. Then her parents travel to Chile and return determined to do something to support the redistribution of wealth in that country under Allende's regime. This shift in her father's work means that the family must move into a small apartment and give up their garden and servant. Anna resents all these developments and is stunned when she is taken out of divinity class at school. She turns to her grandparents who find her parents' new friends as disagreeable as she does. They are against all radicals whom they see as upstarts who want to take all their money and privileges away from them.

Julie Gavras, the daughter of Costa-Gavras, does a superb job in conveying Anna's shock and dismay when her secure world is rocked by her parents' politics. In a series of emotionally charged sequences we see her responding to being in a street demonstration that is broken up by smoke bombs, listening to her mother interview young women who have had abortions, and dealing with a series of ethnically diverse nannies who tell different creation stories and serve the children food from their own countries.

Anna initially resents that their small apartment becomes a place where political comrades gather to discuss the transformations they want to bring about in society. But slowly, she begins to stop rebelling against all the changes in her life. This is not easy for a young girl who loves to be number one and has a need to be special. Anna finds her own voice but it is on her own terms, as it should be. This is an extraordinary movie and it is carried by a sensitive and emotionally affecting performance by Nina Kervel. Don't miss Blame It on Fidel.

Special DVD features include deleted scenes; deleted scenes presented by the director; featurette Making Of; and Behind The Scenes. 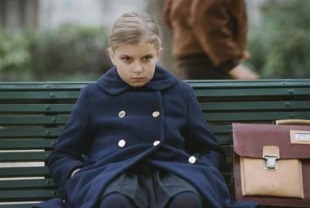