Directed by Wes Anderson
A spunky spiritual adventure story about three American brothers traveling through India, trying to connect with each other and come to terms with the past.

The three Whitman brothers have traveled from their homes in America to India together; they haven't seen each other for a year since the death of their father in a car accident. Now they are aboard a transport train called the Darjeeling Limited. The oldest, Francis (Owen Wilson) says, "We're here to find ourselves and bond with each other. Can we agree to that?" With the help of his assistant, he has drawn up a list of spiritual places to visit.

Neither Peter (Adrien Brody) nor Jack (Jason Schwartzman) is very excited about the journey. Peter, the middle brother, is anxious about the fact that his wife is pregnant and he is about to become a father. Jack, the youngest, a short-story writer, is troubled by the activities of his ex-girlfriend and is constantly eavesdropping on her answering machine. All three brothers are obsessed with not getting sick in India and are filling themselves with pills and potions and pain killers.

Director and co-writer Wes Anderson dealt with family relationships in his hilarious comedy The Royal Tenenbaums where he poked fun at the various rivalries, power struggles, guilts, and dependencies of siblings. In this rambunctious drama, the Whitman brothers have a close encounter with each other on the road. Francis tries to take charge of everything and even make menu choices for Peter and Jack, much to their dismay. Peter drops that their father said he was his favorite son, and that goes over like a lead balloon with his brothers. Sick of the arguments between Francis and Peter, Jack finds an escape having sex with Rita (Amara Karan), an exotic train stewardess who serves sweet lime to all the passengers. Her boyfriend and superior kicks them off the train after they cause several disturbances: first with a poisonous snake Peter has purchased and then with a fight where Jack sprays mace on his siblings.

Although Francis tries unsuccessfully to orchestrate a spiritual epiphany at various religious sites, they finally break out of the cocoon of family squabbling when tragedy strikes three boys on a raft in a river. What happens draws the Whitman brothers into the arms of a community where they slow down and reach out to others in a spiritual way.

The final leg of their journey turns out to be a reunion with their mother (Anjelica Huston) who has become a Catholic nun in a Himalayan convent. She essentially tells them to quit obsessing about the past. But that means leaving a lot of baggage behind and traveling lighter. This spunky spiritual comedy ends with this metaphor and sends us on our way rejoicing for the Whitman brothers and their yearning for a new life. 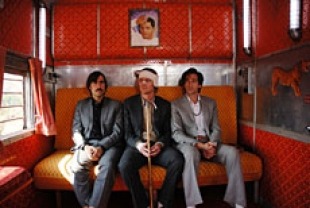 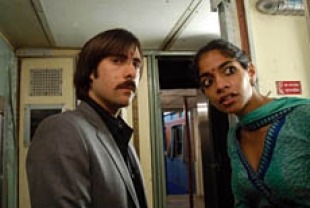 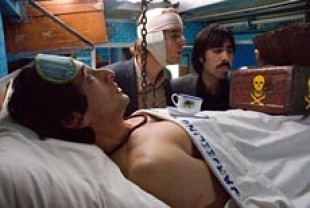 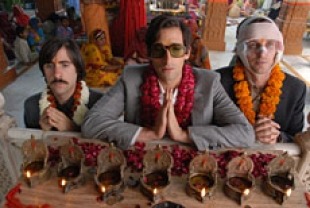