Directed by David Gordon Green
A raucous, wacky stoner comedy about three losers whose encounter with danger bonds them together in ways none of them could have imagined.

The three lead characters in Pineapple Express are cruising for a bruising. Dale Denton (Seth Rogen) is a laid-back process server who chose the job so it wouldn't interfere with his smoking of marijuana. His dealer is Saul Silver (James Franco), a lonely supplier who has no responsibilities in the world except paying the bills for his grandmother who lives in a nursing home. Red (Danny McBride) is another minor drug dealer whose number one interest in life is looking out for himself. He will do whatever it takes to cover himself whenever he gets in tight spots. All three of these disreputable characters are thrown together in a jeopardy situation when Dale witnesses a murder committed by Ted (Gary Cole), a suburban drug lord, and Carol (Rosie Perez), a crooked cop. It doesn't take these two criminals long to identify Dale from the weed he was smoking on the scene, and they send two of their goons to get him. One thing they aren't clear about is whether or not he works for a rival Asian drug lord who wants to take over their operation.

David Gordon Green directs this stoner action-comedy and brings to its wild and raucous storyline his fascination with character-driven films. He was at the helm of George Washington, All the Real Girls, and Snow Angels. The over-the-top screenplay is by Judd Apatow, Seth Rogen, and Eva Goldberg, and it is filled with an unusual mixture of slapstick, satirical jabs at other movie genres and a wacky devotion to the mysterious dynamics of male friendship.

Trying to escape the goons that have been sent to do them bodily harm, Dale and Saul spend the evening hiding out in the woods. As usual they are stoned, and their fears get the better of them. They then visit Red who has betrayed them. A monster fight ensues. Dale visits his high school girlfriend Angie (Amber Heard) who has gone to a lot of trouble to set up a dinner with her parents so they can meet her boyfriend. Everything that could go wrong does.

Pineapple Express is a very funny movie that is filled with startling moments of humor and unbridled playfulness. These three stoners experience a death-defying ride through violence and danger and come out the other side as confirmed buddies who have learned to rely on each other and to not always put themselves first. In a concluding meal in a restaurant, they recount to each other the trials and tribulations they have survived. And in a moment that can only be seen as sacramental, they cement the warm feelings they have for each other. Their scary experiences have bonded them together as friends in ways that none of them could ever have imagined.

Special DVD features include both theatrical and extended versions of the film; a commentary with filmmakers and cast; extended and alternate scenes; a gag reel; and "The Making of Pineapple Express." 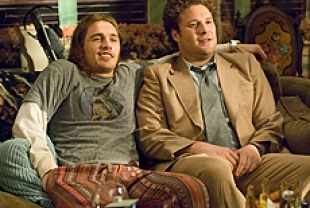 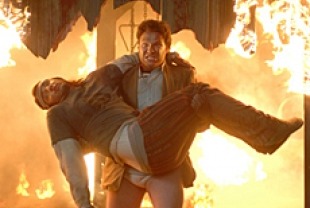