Directed by Gary Fleder
A sturdy sports flick about the legendary Ernie Davis who was the first African-American to win the Heisman Trophy.

Ernie Davis (Justin Martin) is an African-American boy whose speed comes in very handy when racist bullies chase him. He is guided along the path of sturdy values by his traditionalist grandfather (Charles S. Dutton) who raises him at his home. In high school, Ernie (Rob Brown) impresses everyone with his athletic ability. He proves to be an exceptionally gifted football player who is faster than anyone else on the field. His heroes are Jackie Robinson, who broke through as a baseball star, and Jim Brown (Darrin DeWitt Henson), a football star at Syracuse. That team's coach, Ben Schwartzwalder (Dennis Quaid), uses Brown to convince Davis to come play for him. The young athlete doesn't disappoint and, as a result, is chosen to play on the Varsity team during his freshman year.

Davis finds a close friend in Jack Buckley (Omar Benson Miller), another African-American player, but has a tough time with Bob Lundy (Geoff Stults), a bigoted teammate. In a dazzling 1959 season, Davis sets records. But the Syracuse team is given a hard time when they play West Virginia and then Texas. Fans filled with racial hatred hurl bottles at the black players.

Gary Fleder directs this well-done sports flick and provides a scary picture of the humiliations and challenges faced by Ernie Davis and other African-American athletes. Rob Brown (Finding Forrester) does a fine job conveying Davis's competitive spirit, and Dennis Quaid is excellent as his crusty coach who learns a lot from this talented player and the hatred he faces on and off the field. Ernie Davis was the first African-American to win the Heisman Trophy. 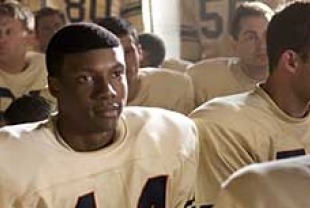 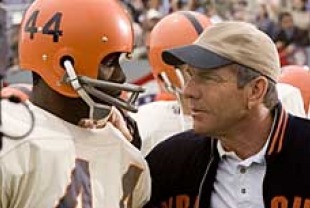 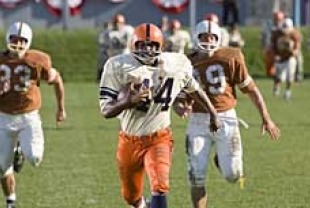