Directed by Sean McGinly
A delightful drama about a seasoned mentalist who has seen better days and yet can still engender genuine wonder in the minds of his audiences.

The Great Buck Howard (John Malkovich) is a mentalist who never stops sharing with everyone he meets that he appeared on The Tonight Show Starring Johnny Carson 61 times. Now this veteran entertainer (he refuses to call himself a magician) is resigned to appearing in small auditoriums; he's especially popular in Ohio. Onstage Howard sings "What the World Needs Now," guesses secret numbers, hypnotizes people from the audience, and signs autographs afterwards if he's in the mood.

Troy (Colin Hanks) is not enjoying law school and so he drops out without telling his authoritarian father (Tom Hanks). This sober-minded young man wants to gain some experience with a special job. He is hired by Howard as his road manager.

The two of them get along reasonably well thanks to Troy's patience with his boss's mood swings, eruptions of anger, and criticism of other people's stupidity. With his career headed on a downward spiral, the mentalist comes up with a new act that he is convinced will top the most popular part of his show — finding money hidden in the audience. He decides to premier this feat in Cincinnati. Valerie (Emily Blunt), a publicist from New York City, arrives to set up press coverage of the event. She and Howard do not hit it off but she finds Troy to be a sweet fellow and begins a romantic interlude with him. Meanwhile Howard is upset by the surprises unleashed upon him by two fans (Debra Monk, Steve Zahn) who drive him around town in a stretch limo. Nonetheless, he finds his way back into the national spotlight and heads to Las Vegas for the biggest paycheck of his life.

The Great Buck Howard is written and directed by Sean McGinly. It is a delightful drama with an impressive performance by John Malkovich. His vigorous handshake jolts everyone and his enthusiasm onstage is genuine. He really enjoys what he is doing and that speaks to Troy who wants to feel the same way about whatever career choice he ultimately makes. But the magical quality that comes through to the former law student is the wonder Buck engenders in the audience and in himself. Troy never really figures out how Howard does his finale of finding money hidden in the audience. One of the mentalists favorite phrases which he uses on the stage repeatedly is "Isn't it wild?" Yes, it is and we — like Troy — are extremely grateful whenever we can be wonder-struck!

Special features on the DVD include a commentary with writer/director Sean McGinly and actor Colin Hanks; deleted scenes; extended scenes; outtakes; behind the scenes; "HDNet: A Look at the Great Buck Howard"; and "The Amazing Kreskin." 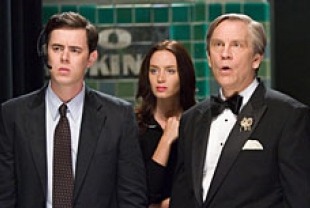 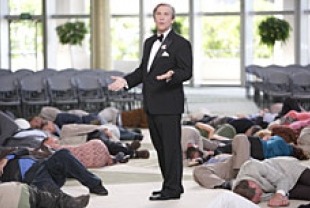 PG - some language including suggestive remarks, a drug reference