Directed by John Crowley
A quirky coming-of-age drama that will draw you in with its spiritual undertow and delight.

Ten-year-old Edward (Bill Milner) lives with his Mum (Anne-Marie Duff) and Dad (David Morrissey) who run an old age home in an English seaside town in 1987. He has not really connected with any of the elderly residents — Bob (Peter Vaughn), a shaky World War II veteran; Elsie (Rosemary Harris), a lonely woman who wants more romance in her life; Ena (Thelma Barlow) who is detached from reality; Lilian (Sylvia Syms), who is caustic; and Reg (Leslie Phillips), a lady's man. However, living with these folk who are at the end of their lives gives him a chance to pursue his favorite thing in the world — investigating what comes after death. Looking for answers, he tapes the last breaths of a dying resident and listens to them, trying to unravel the mystery. Then, Edward's interest in ghosts takes over, and he shares his quest in a classroom report. This strangeness alienates him even more from his classmates.

When Clarence Parkinson (Michael Caine) rolls up in his camper, Edward immediately takes a disliking to him. His mother insists that this new resident sent to Lark Hall by Social Services take Edward's former room. Clarence has no patience with the boy who keeps pestering him once he finds out that he is a magician. This angry old man was "The Amazing Clarence" who performed widely with his wife and assistant Annie. Following her death, he lost his zest for life. But eventually, these two oddballs — the boy fascinated with the afterlife and the bitter old man who wants to quit the human race — forge an unlikely friendship.

John Crowley directs this combination coming-of-age story and quirky comedy based on a screenplay by Peter Harness who grew up in a retirement home. They both do a marvelous job conveying the cross-generational friendship that develops between the two lead characters. Michael Caine puts in a stellar performance as Clarence who is on his last legs yet still tries to usher Edward back into the land of the living. Bill Milner is excellent as the hypersensitive boy who brings a little bit of light and affection into the shadows surrounding Clarence.

Is Anybody There? is one of those small films that is easy to overlook in the crowded schedule of traditional Hollywood comedies and action dramas. Let the magic draw you in so you can experience the light and the delight. 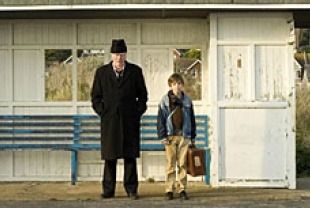