The Men Who Stare at Goats

Directed by Grant Heslov
A quirky and clever movie about the oddball adventures of some psychic spies dedicated to nonlethal combat.

Bob Wilton (Ewan McGregor), a journalist in Ann Arbor, Michigan, interviews a local man who says he's a psychic and that he was once part of a military program back in the 1980s run by a former Vietnam veteran. Members of this secret group were taught to pass through walls, read other people's thoughts, and much more. Although he wonders if the story is just crazy ramblings, he is still fascinated by its implications. When his girlfriend leaves him in 2003, he heads to the Middle East and in Kuwait City, meets Lyn Cassady (George Clooney) who just happens to be one of the men mentioned by the psychic.

Thanks to a connection between them spotted by this eccentric soldier, the two head off together to war-torn Iraq. Cassady, who says he's on a new mission, shares the bizarre story of his involvement 20 years earlier in the New Earth Army. Bill Django (Jeff Bridges) is the founder of this band of "psychic spies" who are taught to free their minds and practice non-lethal methods of warfare. After Vietnam, he got involved in the New Age movement and studied the martial arts, healing, psychology, healing, and extrasensory experiences. His secret program aims to train men to have the courage of a warrior and the spirituality of a monk. Cassady becomes one of his best students and at one point actually kills a goat by staring at it, an act he forever regrets.

"We must be the first superpower to have super powers," says Django. He calls his troops Jedi warriors. But no one really masters "remote viewing" (an out-of-the-body experience that transports one to witness events taking place in far away locals), invisibility, or greeting the enemy with "sparkly eyes." Wilton learns the reasons why the New Earth army failed and Django was dismissed.

Back in 2003, the two Americans get lost in the desert, kidnapped by some terrorists, and wind up running for their lives. Cassady doesn't prove himself to be much of a Jedi warrior at first but he shows his stuff when they wind up at a clandestine camp run by a former New Earth Army malcontent Larry Hooper (Kevin Spacey).

This quirky and clever movie is directed by Grant Heslov based on Jon Ronson's 2004 bestselling nonfiction book about the government's attempts to harness paranormal abilities to combat its enemies. The screenplay by Peter Straughan has the same kind of off-the-wall humor and madness to it as Three Kings and Catch-22. While gently poking fun at the military, the film can also be seen as affirming the idealism of those who believe that work must be done to stop the present-day insanity of endless and senseless violence, barbarity, and torture in the so-called "war on terrorism." It is a lark to see Clooney, McGregor, Bridges, and Spacey together on the screen; the movie clicks thanks to their zany performances.

Special features on the DVD include "Goats Declassified: The Real Men of the First Earth Battalion"; Project "Hollywood": A Classified Report from the Set; audio commentaries; character bios; and deleted scenes. 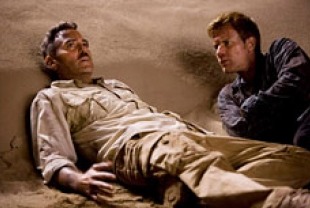 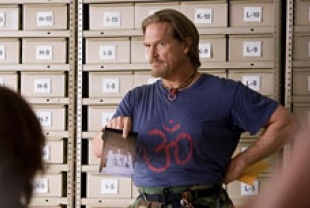 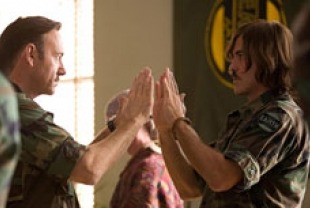 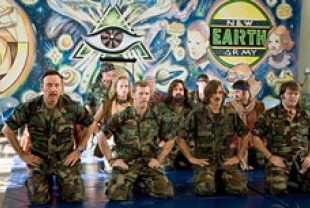