Directed by Scott Teems
An intense and powerful portrait of a stubborn 80-year-old man who is struggling with letting go of his attachment to an idea and to a place he loves.

Eighty-year-old Abner Meecham (Hal Holbrook) is living in a Tennessee nursing home; his son Paul (Walton Goggins), a lawyer, thinks this is the best place for him to be. But the old man is very unhappy there sitting in isolation and refusing to participate in any activities. One day, he just walks out of the place. He shows up at his country farm and is stunned to discover that his son has leased the property to Lonzo Choat (Ray McKinnon) who now lives there with his wife Ludie (Carrie Preston) and his teenage daughter Pamela (Mia Wasikowska). Intending to spend his last days in peace on the farm he loves, Abner is enraged by the idea that the place in now in the hands of a person he views as "white trash." On a visit to his old friend Thurl (Barry Corbin), he learns that Lonzo has been living for years off an insurance settlement for an accident. When Pamela reveals that her father hates barking dogs, Abner takes one back to the farm from Thurl's place. He hunkers down for a long battle of wills in the tenant shack on the farm where his things have been moved.

Abner is a stubborn and inflexible patriarch who has divided the world into good guys and bad guys. He has no capacity or willingness to see gray in his closed world of black and white. Lonzo is an angry and disappointed man whose authority and masculinity are threatened when this intruder shows up and treats him like dirt. He has dreams of turning his life around on this farm and proving everybody wrong who see him as a lazy loser. When pushed too far, Lonzo explodes into a toxic rage which falls upon his wife and daughter. They are saved from further physical harm by Abner, who has a gun among his possessions.

That Evening Sun is written and directed by Scott Teems based on a story by William Gay. Although Abner and Lonzo see each other as implacable enemies, they share in common a keen disappointment and guilt over the way their lives have turned out. In the many hours alone in the tenant shack, the old man sorts through old photos and memorabilia. He dreams of his beloved wife and the truth about his role in her death.

In his book The Force of Character and the Lasting Life, James Hillman discusses the role of anger in the last days of many old people:

"Anger could indicate a desire for freedom from the long-lasting patterns of life. It is as if there is a spirit bottled up that doesn't want any longer to be caught in daily trivia, doesn't want to be in a body on this earth. Then the irritability expresses a frustration at having to be here and at waiting so long to leave. My friend Professor Malidoma Some, an initiated elder, says that among his people in Burkina Faso the old ones are generally angry and ill-tempered, irritated by the banalities of the daily round. Part of them is already elsewhere, departed. Their irritation signifies that departure."

However we try to explain Abner's bitterness and anger, it is edifying to watch him struggle with the spiritual practice of letting go. This is one of the hardest things to do, and Scott Teems does it full justice by not refusing to convey the suffering and pain that are wrapped up in being so attached to an idea and a place. 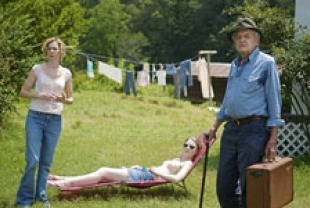 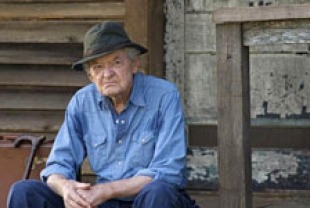