In Milan, Italy, the wealthy Recchi family resides in a spacious and glamorous house. The patriarch (Gabriele Ferzetti) and founder of the textile business is about to hand over the reins to his son Tancredi (Pippo Delbono). But when he also states that his grandson Edo (Flavio Parenti) will have joint control, there is a palpable shock at the dinner table of gathered family and friends. He is one of the sons of Tancredi and his wife Emma (Tilda Swinton).

Born in Russia, Emma is an elegant and beautiful woman who seems to be just another one of the aristocratic art objects in their expensive home. Her children have grown up and her husband is wrapped up in business. The only one who has any clue of her boredom and discontent is her loyal servant Ida (Maria Paiato). A yearning for sexual adventure stirs within Emma when she sees a note from her daughter Betta (Alba Rohrwacher) who has fallen in love with a woman she is studying with in England.

Edo and his friend Antonio (Edoardo Gabbriellini), a chef, are planning to open a restaurant together. When Emma joins her mother-in-law and the young woman Edo is dating for lunch, she is transported into an incredibly sensuous state of being after tasting Antonio's prawns. Afterwards, Emma learns that he has a house in Sanremo, where he and Edo want to open their restaurant. Invited to Nice by Betta for an exhibition, she passes through Sanremo and unexpectedly meets Antonio, who volunteers to show her the restaurant site. A bohemian outsider, he grows his own vegetables and picks mushrooms. The rustic setting and the erotic connection she feels toward this intense young man come to the fore in the countryside where they kiss and begin an intimate journey not knowing where it will take them.

Special features include closed captions; a commentary with director Luca Guadagnino and actor Tilda Swinton; a featurette, "Moments on the Set of I Am Love"; and interviews with cast and crew. 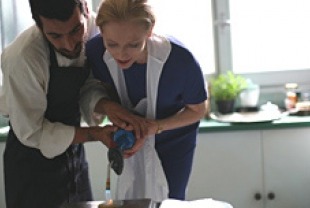