Scott Pilgrim vs. the World

Directed by Edgar Wright
A zany and wildly creative comedy about the ups and downs of young love.

Get ready for a wild ride with this zany comedy about the ups and downs of young love. This graphic novel adaptation has several things going for it: a likeable anti-hero, a set of funny and kooky characters, and style that weds comic book and video game antics. Welcome to the world of 22-year-old Scott Pilgrim (Michael Cera), an unemployed bass guitarist for a Toronto garage band called Sex Bob-omb. This nerdy guy always is able to spark conversation among his inner circle of family and friends. After being dumped by Envy Adams (Brie Larson), who is now fronting a successful band, he has taken up with a 15-year-old Catholic schoolgirl named Knives Chau (Ellen Wong). His gay roommate, Wallace (Kieran Culkin), is baffled; his critical sister (Anna Kendrick) is mortified; whereas his buddies in the band are curious and want more details about his relationship with her. The band's cynical drummer (Alison Pill) thinks Scott is crazy but then she's still fuming over being dumped by him years ago.

Although the protagonist is having fun with the adulation coming his way from Knives, he is bowled over at a party when he spots "the girl of his dreams," a newcomer named Ramona Flowers (Mary Elizabeth Winstead). At first, she seems to be out of reach, but Scott Pilgrim is willing to do almost anything to establish a romantic relationship with her. Imagine his surprise when he learns that admission into her life requires him to do battle with her seven demonic ex-es who want to eliminate him permanently from Ramona's life. Among their number are a muscle-bound film star (Chris Evans); a power-vegan stud (Brandon Routh); and a nefarious wheeler-dealer (Jason Schwartzman). Although far too much of the story is taken up with the boys' video-game like fights, this does not stamp out the story's ever-surging comic energy.

Director Edgar Wright keeps this spunky and playful movie spinning along with clever dialogue, a cast of consistently funny characters, several phantasmagorical battle-of-the-bands sequences, and some imaginative takes on the romantic quest for true love. Michael Cera carries Scott Pilgrim vs. the World on his skinny little shoulders but is given strong support by Culkin, Wong, and Winstead. 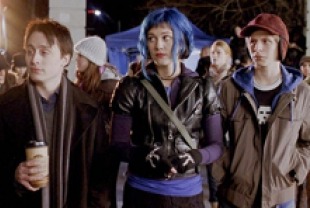 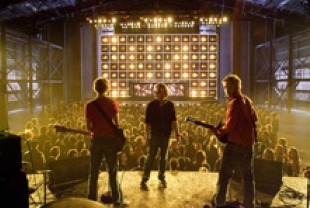 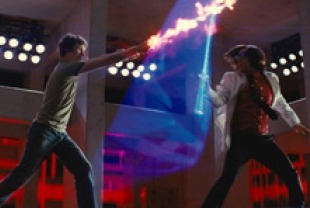